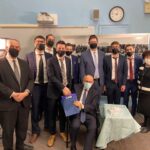 Seniors in MTA’s Names, Not Numbers elective course are combating the rise of anti-semitism by creating their own Holocaust documentary. Talmidim interviewed incredible survivors and are sharing their compelling stories with the world to make sure that these heroes are never forgotten. The incredible and often heart-wrenching narratives include: Ruth Mermelstein, who was torn from […]

Seniors in MTA’s Names, Not Numbers elective course are combating the rise of anti-semitism by creating their own Holocaust documentary. Talmidim interviewed incredible survivors and are sharing their compelling stories with the world to make sure that these heroes are never forgotten. The incredible and often heart-wrenching narratives include: Ruth Mermelstein, who was torn from her home in Romania and sent to Auschwitz, where she was forced into slave labor. As the Russian Army began to approach, the Nazis sent Ruth, along with everyone else who was at the camp, on a 5-week Death March to the Bergen-Belsen concentration camp. On April 18, 1945, Ruth was liberated by British troops. Esther Jakobowits talked about what it was like to live in Munich, Germany when the war started. Her home was attacked and her father suffered a personal attack, all at the hands of the Nazis. Her father was a Rabbi, and because of his position, the Chief Rabbi Emergency Council in London was able to arrange safe passage for their family to England in 1941. Helen Rosenstark, who was born in Czestochowa, Poland in 1938, was taken in by a local woman after her parents were sent to the concentration camps and was raised as a Catholic. Helen was reunited with her mother, who survived the concentration camps, when she was 7 years old. Noemi Spitz went into hiding with her family when she was an infant. They pretended to be non-Jews and rented a bunker from an old Hungarian man during the war. They were the only Jews from their hometown Bratislava to survive the war. Even after the war, antisemitism was rampant in Czechoslovakia and her family was forced to flee to Canada to escape it. Noemi’s husband, Tibor Spitz, was born in Northern Slovakia. When he was 12 years old, almost all of his family was sent to Nazi death and labor camps and were never seen again. During the 1944 uprising, Tibor escaped with his remaining family members and hid in a forest, but they were discovered by the Red Army Partisans, who attacked them in 1945. He was liberated by the Soviet army 7 months later. Tibor later escaped to Canada with Noemi and went on to become a scientist, and later in life, he became a professional artist and Holocaust lecturer. Rabbi Dr. JJ Schacter (grandfather of Senior Eli Knapp) talked about what it was like growing up as the son of immigrant parents and shared the story of his father, Rabbi Herschel Schacter, who was an army chaplain during World War II. One of his major accomplishments was his work in the liberation of Buchenwald. Thanks to these brave survivors for sharing their stories of faith, hope, and survival. Seniors look forward to ensuring that these stories are never forgotten, as they create their documentary film, which will debut in the spring.