On Wednesday, March 23, 2022, the warm and intimate space of the Yagoda Commons on the Beren campus was the perfect venue for students and faculty, both in the room and through the magic of Zoom, to meet Roya Hakakian, author of A Beginner’s Guide to America: For the Immigrant and the Curious as well as a collection of poetry in Persian and an acclaimed memoir in English called Journey from the Land of No, just to name a few of her many literary accomplishments.

Those in the room also had the added pleasure of a buffet of Persian food.

Hakakian had been invited by Dr. Ronnie Perelis, director of the Rabbi Arthur Schneier Program for International Affairs, and Kimberly Moore, director of Care Café at Wurzweiler School of Social Work, to speak about immigration, human rights and culture in a globalized world in celebration of World Social Work Day.

After thanking everyone for the kindness that she had been shown while being on the YU campus, she eased into explaining why she wrote A Beginner’s Guide. As she explained, the book is, in great measure, based upon her initial experiences when she emigrated to the United States from Iran at the age of 19 in 1985 without knowing a word of English and carrying only those possessions that she could carry from her home.

“I thought about writing this book in 2016,” she noted, because she wanted to “extract the common experiences of immigrants” because “anybody who has been completely uprooted [and has had to] find a home, learn a new language, make friends, find a job, get on, knows that at some point there are common denominators.” 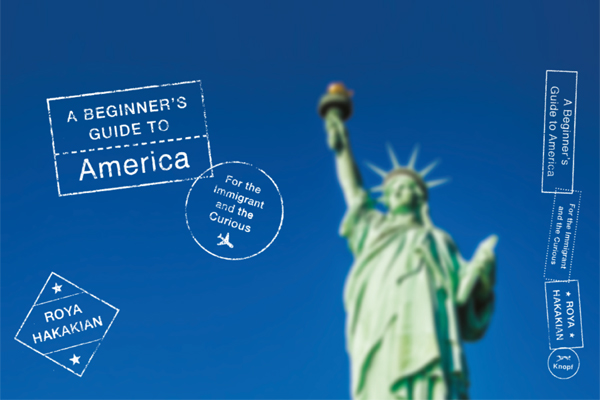 One of her intentions in writing the book with this particular focus was to counter the divisive language and actions around immigration in the United States, to put up what she called a defense against the thinking that brought about Muslim bans, demeaning immigrants as criminals and ranking some immigrants as better than others (Norwegians, yes, but not Mexicans—though, as she pointed out, if you’ve lived in Norway, “why would anyone want to come to the United States?”).

“At a time when we are so divided and when everything else is turning so ugly,” she observed, “maybe just maybe, and this I’m saying in particular for the English majors among you, the best thing I can do is to create beauty through language and let that beauty lift us to a place that is not divided, or at least less divided, and let that beauty become the reason that we feel a sense of healing.”

She then read a short excerpt from an early part of the Guide, when the newly arrived person wakes up in her American bed trying to get her bearings, and there’s a knock on the door. A man walks in, and the encounter begins.

There will be a knock at the door from, let us assume, a rotund person with a tool belt around his waist. When you open the door, the words spill from his mouth like a steady stream from a faucet. Towering over you, he’s all smiles and you’re all confusion. In his shirt pocket is a scroll long enough to reach his collar. Your eye catches the word “lease” on the document, and you think this bubble of a man must be your landlord or working for him. He has extended a hand, and when you shake it his hand swallows yours. The size of his grip will stun you. Here, most things are, as the commercials winningly blare, “extra large.” Beware that the American “extra” is far more generously proportioned.

When he lets go of your hand, he taps his chest and enunciates a word. His name, you venture, and you introduce yourself in return. He scrawls the name on the back of a card and gives it to you. Then he will likely ask, “How’s it going?” You might think this is a genuine expression of interest in and concern for you and your state of affairs and will be tempted to give him a thorough briefing. You may want to tell him about the airport, the security screening, the cab ride and your disorienting jet lag.

If you do, he’s likely to be confused or interrupt you. You see, the American “how’s it going?”, which comes in several varieties—“How are you doing?” or the curt “What’s up?”—is in fact the equivalent of a little verbal cough to clear the throat. It is no more than a conversational lubricant to accompany a nod or handshake, not an invitation to a real dialogue. A mere “Everything is OK. And you?” will do.

The still-running faucet pauses briefly and then asks, “Where are you from?” And there—you have arrived at the most vexing four words of your early days in America. Your reaction to this will be, above all, one of alarm. Your immediate thought would be that your pleasant manner has failed. After all, he has found you out, knows you’re not from here. You take it to mean that you do not belong, and if you have a particularly gloomy nature, you worry that you can never belong—even after years of being here and trying to fit in, your accent or something else about you will always give you away.

And then the question, with a minor variation, can still haunt you: “But where are you really from?” When you are new, as you are on that first morning, anxiety explains all things before reason does, but in time you will see that there are many interpretations for those four words, as there are words for snow for the Eskimo.

Asking where you are from can often simply be a way of breaking the proverbial ice. You might say, “I’m from Thailand,” to which the person asking the question could in turn excitedly say, “My housekeeper is Thai” or “I love drunken noodles.” You might not be fond of your national cuisine, but no matter—”where are you from?” is launched into the conversation, only to further the introduction. Even the native born ask each other the same question just to get acquainted. Sometimes it might lead to a wistful memory: “You are the spitting image of my cousin Mattie, may he rest in peace.” Or if the person asking is a single man or woman in pursuit of love, the following can ensue: “If everyone in your country looks like you, I know where I must go for my next vacation.”

Such lines are most common at watering holes and nightclubs.

However, an encounter with a freshly arrived immigrant can have a disarming effect, not unlike that of alcohol.

In the Q&A that followed the reading, Hakakian and her questioners touched upon many topics. In response to a question about whether the United States should accept Russians who want to leave Putin’s rule, given what is happening in Ukraine, she answered, that yes, of course, they should be accepted because “people should not be judged by their government” and observed that if she had been judged by being from Iran rather than on her own merits, she never would have been allowed into the United States.

But that the more important policy question to her is what can be done to prevent people from becoming refugees in the first place. She drew a direct line from the Russia who assisted Assad in Syria a decade ago and whom no one chose to oppose then to an emboldened Russia who invaded Ukraine this year. “If you don’t look at the root causes of problems and don’t feel that you must exercise some sense of duty and responsibility as a global citizen to intervene in matters like these, then you will have refugees. The better thing to do isn’t to say how many refugees can we accept; the better thing to do is to say, What can we do to prevent them from becoming refugees?”

She extended this idea of collective responsibility to such matters as COVID and climate change, noting that “we must come together as a global unity of humanity to address them” because if these problems are not solved in a unified way and as early as they possibly can, “the investment later to resolve the disasters will be much larger, and we may never be able to accept it.”

While admitting that she is not a student of Winston Churchill, “I have thought a great deal about how he managed to sell the necessity of everybody getting involved against Hitler, and I think we need visionaries like that to lead us in times like this.”

In response to a question about the poetry in her own writing, she noted that poetry is not just “short verses stacked on top of each other” and that “there can be a lot of poetry in prose, and I do my best to do that in my English prose as well.”

But to show how poetry can be evocative even if in a language not understood by the audience, she rounded off the evening reading a short piece in Farsi, and the strange but compelling rhythms brought the evening to comfortable and satisfying end, echoing her earlier assertion about how “beauty [can] become the reason that we feel a sense of healing.”