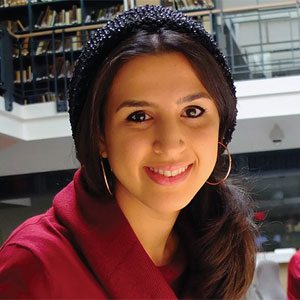 Mijal Bitton ’11S was recently named one of New York Jewish Week’s “36 Under 36,” a recognition given to “changemakers reaching across divides and edging the Jewish community forward.” What a perfect description of the work that Bitton does as a leader, scholar, doctoral candidate, Rosh Kehilla [spiritual leader], teacher, and parent who is dedicated to exploring the forces and ideas shaping Jewish life in the contemporary world.

Bitton was born in Argentina. She has lived in Latin America, Israel, and the United States, where she arrived at the age of 12.

“I feel a deep affinity with the historical concept of the wandering Jew,” she says, “the Jewish men and women who always felt a little bit like strangers and who used this feeling to carry words and ideas from one place to another, recreating homes, building new diaspora communities and giving birth to complex and creative intellectual endeavors.”

“My family was heavily influenced by Hakham Ovadia Yosef’s pan-Sephardic halakhic worldview,” she says. “Both the practice of halakha and Jewish law as an ideal were emphasized, although not conflated.” She recognizes her parents as the primary inspiration for her Jewish identity. “They modeled Jewish passion, commitment, curiosity, and learning,” she says.

Given her crosscultural upbringing and her strong ties to Jewish traditions and practices, Bitton wanted to make sure that, when it came to college, “my commitment to serve my own particularistic community would only be enhanced by other passions. In this sense, YU was a very fruitful environment.”

She also enjoyed studying with Dr. Mordechai Cohen, professor of Bible, associate dean of the Bernard Revel Graduate School of Jewish Studies, and the divisional coordinator of academic Jewish studies at Yeshiva College, including a course on the different philosophical schools of thoughts of Maimonides and Nachmanides. Bitton also loved meeting “incredible women” at Stern College for Women. Her friendships “helped me actualize my commitment to serve the Jewish community” and have lasted until today.

In her last year as an undergraduate, while she was writing her Honors thesis, Bitton began working with Shuki Taylor, director of experiential Jewish education at CJF, whom she describes as “one of the most nuanced Jewish educators and visionaries I know. Working with him gave me the confidence and skills to keep moving forward.”

And move forward she has. She is committed to investigating, analyzing and explaining those elements in Jewish life, both in America and across the world, that can bind Jews together, rather than divide them.

Bitton’s immediate undertaking is her dissertation at New York University on the boundary-making mechanisms in the New York Syrian Sephardic community. Her sociological research shines a light on a segment of American Jewry that often takes a back seat in scholarship to Jewish populations with Western origins. She emphasizes, as she did in a 2016 interview with New York Jewish Week, that in her research, “Sephardim are not viewed or treated as exotic, but simply as another type of American Jew.” (Bitton received a Wexner Graduate fellowship, a Jim Joseph Fellowship, and an AVI CHAI fellowship—among others—to support her studies.)

She is also building community as Rosh Kehilla of the Downtown Minyan, which she co-founded with Rabbi Yehuda Sarna and Gabriel Slamovits in 2016. Bitton leads the community, which she describes as “traditional halakhic” and as “spiritually uplifting, intellectually engaging, and outward looking.” It is a place where people with multiple voices can meet, be heard, and be accepted, a value that for her, comes right out of the Torah.

Come fall, Bitton will have a new role as incoming Fellow in Residence at the Shalom Hartman Institute of North America. For the past four years, Bitton has been a doctoral fellow and faculty member at the Hartman Institute, whose mission is to strengthen Jewish peoplehood, identity and pluralism, and to ensure that Judaism is a compelling force for good in the 21st century.

Her work at Hartman has explored new paradigms of Jewish identity for diverse Jewish populations, investigated the moral underpinnings of the social scientific study of Jews, focused on ethical leadership and advancing gender equity, and furthered a values-based conversation around Israel and Zionism. In her expanded role, Bitton will continue her teaching and research and will focus on several projects, including working on a book about Sephardim in America and works exploring the sociological and moral insights found in select Biblical narratives.

For the future, Bitton looks forward to the mix, sure to include the publication of her research, and more: the teaching she will do at the Hartman Institute, the services she provides at the Downtown Minyan, and to the public conversation of ideas. She anticipates ongoing residence in a city she loves, with her husband Rabbi Sion Setton ’09YC, ’14R (her brother’s roommate at Yeshiva College), and their son Ness.

Whatever shape her life takes, Bitton is committed to making sure that everything that she pursues is done with integrity, “L’shem Shamayim” and becomes, as she said to New York Jewish Week, “a source of strength, creativity and inspiration.”