For Dr. Fredy Zypman, professor of physics and chair of the physics department at Yeshiva College, the key to big advances in the creation of everything from medicine to electric cars might lie in a better understanding of something small: nanoparticles.

Along with his research colleague, Dr. Steven Eppell, associate professor of biomedical engineering at Case Western Reserve University, Zypman has been awarded a $412,000 grant by the National Science Foundation to develop a groundbreaking technique that will allow scientists to map and measure electrical charge distribution on the surface of nanoparticles and tiny molecules. Eppel will collect the experimental data, while Zypman focuses on the theoretical analysis and software development at YU.

Charge distribution plays a critical role in many natural processes. For example, it determines the communication that allows some proteins within the bodies to create tissue, a mechanism called “self-assembly” which in and of itself could yield revolutionary advances in biology and disease treatment if it was better understood. By providing scientists with a tool to determine exactly where charges are located and what the charge value is within a specific molecule, Zypman’s research could provide valuable insight into how that process could be recreated for medicinal purposes.

“If we knew where charges were located in a protein, we would also know what the forces of interaction were that would cause them to self-assemble correctly, but the main problem for us is that we don’t know where those charges are,” said Zypman. “We’re at a very primitive stage of understanding the charge content of very small systems. Proteins, nanoparticles—we’re talking about systems that are 10,000 to 100,000 times smaller than the thickness of a hair. People commonly use 100-year-old techniques to measure charges in systems like this.”

Those techniques may be standard, Zypman argued in his proposal to the NSF, but they’re also incredibly limited. “They can’t be very accurate because they can only give you a likelihood of what the charge content is instead of a definitive value, and even those are average values over many thousands of particles, not an individual one.” Why is that a problem? “Imagine you’re trying to measure the height of each of 100 people in one room so that you can pick one person for a specific task, for instance, maybe a shorter person to serve as a jockey. It isn’t very helpful to know that all together, their average height is 5 foot 9.”

According to Zypman, the key to unlocking that information is hidden in the sensor of an atomic force microscope, a high-resolution device that allows scientists to study objects at a resolution higher than 1,000 times the magnitude of a standard optical microscope. Zypman’s goal is to develop a technique that will help researchers understand the sensor’s behavior so they can retrieve and analyze that data, a feature that hasn’t been developed by the companies that produce the microscope. “Very few people are trying to understand what we’re doing with electrical forces—most of today’s efforts are focused on imaging—so it’s not something that’s even been thought of in terms of these microscopes,” said Zypman.

To achieve this, Zypman and his student researchers— currently four Yeshiva College students assisting him with the project and supported by the grant, along with a PhD student who will join them next fall—have to analyze the dynamics of the atomic force microscope in an unconventional way.

“We’re measuring the tiny forces that are active at a substance’s surface, which lets us ultimately figure out how much electric charge the substance surface contains,” explained junior Yitzchak Fried. “We study a rod that bends and vibrates due to the forces exerted on it by our sample. By measuring the way the rod vibrates, we can derive the forces acting on it.”

It’s not an intuitive process, but Zypman and his students hope to make it one by creating a computer algorithm and user-friendly software that will calculate those forces at the touch of a button. To do that, they have to write all of their own software from scratch. “Once we collect the data from the microscope, we have to write code to input that voltage into the software which outputs the forces,” Zypman said. “We also need to write our own programs to analyze those forces to decipher the charge content and location. And in writing that software we have to consider not only the data from the microscope, but also the other forces that appear in nature which could be impacting our readings – for example, if a protein is normally found in blood, there are electrolytes in it which also contain tiny charges that can mask the charge content of the protein itself.”

Ultimately, Zypman hopes to create a graphic user interface and package the software he and his students design to make it accessible to researchers and industry, because understanding charge content and location in small systems could solve problems in fields that range from biology and chemistry to environmental science and car design.

“Researchers develop nanoparticles to use as a medicine delivery agent—they create a nanoparticle with certain charge content, and the drug that needs to be delivered is attached to that nanoparticle,” said Zypman. “The charge content is what ensures that the drug is only released in the part of the body it’s meant for and nowhere else. But in many cases scientists don’t really know exactly what the charge content is of the nanoparticles they’re using—it’s a process of trial and error. Our technique would provide a time-saving tool that would allow them to actually understand, and eventually recreate, the specific charge distribution needed for each delivery mechanism.”

It could also improve the way your city cleans its water. “You can produce water filters containing nanoparticles with a certain charge content that attracts dirt, and afterwards use an external magnet to remove the dirty nanoparticles,” said Zypman. “Now not only is the water cleaner, but you can even recycle the nanoparticles for future reuse.” 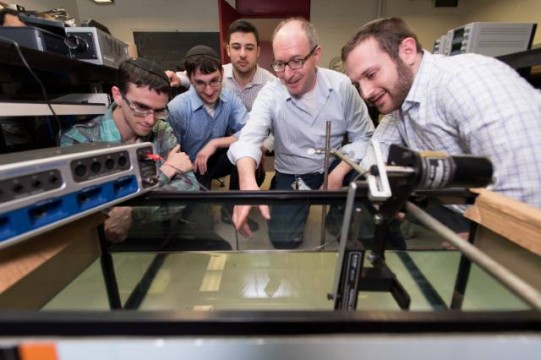 Another possible beneficiary of Zypman’s research? A better electric car.

“Something researchers have struggled with for 30 years, not only in terms of making an electric car energy efficient but also appealing to customers, is being able to provide enough acceleration,” said Zypman. “You can run a car on batteries alone, but traditional batteries would provide too little acceleration, because it takes a substantial amount of time for enough charge circulation to build to deliver that kind of energy.” Another option, capacitors, can deliver a large charge quickly enough, but would then be immediately depleted—not ideal for freeway driving.

So scientists have been searching for a “super-capacitor,” a device which could deliver the right amount of charge in the right amount of time without being depleted. “Researchers have looked hard at the surfaces of various materials to determine which ones might be good candidates to develop as a super-capacitor,” said Zypman. But his research could solve the problem from a different angle. “If we understood how charge was distributed across the electrodes of traditional batteries, we could design more efficient ones. For example, if you studied a battery under an atomic force microscope you might discover that when you manufacture them, you’re only efficiently covering 10 percent of the surface, in which case you should try to think of other ways to use the electrodes to increase the charge.”

Zypman anticipates the new grant will help him and his collaborators to see meaningful results from their work in a few years. It has also allowed him to take on four undergraduate researchers, each of them focusing on a different aspect of the many-layered problem and learning many theoretical and practical mathematical skills in the process.

“Personally, I enjoy taking a real life, highly applicable problem—with all its allure, mystery and apparent complexity—and simplifying it by separating it into subproblems and modeling it in a way that is sufficiently accurate but, at the same time, more easily expressed mathematically,” said Daniel Lazarev, a senior majoring in physics and mathematics, who is working with Zypman to try to determine the interaction of forces that take place between the atomic force microscope and linear charge distributions embedded in electrolytes. “The real life problem is then shuttled into the abstract world of mathematics, where our previously elusive solution can be ensnared by the methods and tricks of mathematics. It’s almost magical.”

For Fried, a mathematics major, working with Zypman has given him important insight into the way the field can play a major role in the world of industry. “In my math courses, I approach math on a theoretical level—this project has given me my first exposure to how a real world problem can be approached using mathematical techniques,” said Fried. “On several occasions, Professor Zypman has pointed out that the sort of clean mathematical formulas we work with in class don’t really describe the physical situations we want to analyze. Often, what seems like a technically less precise mathematical framework is actually a better model for how the world behaves.”

He added, “Learning how math is actually applied to raw nature is probably the most mind-opening experience this project has given me.”