On April 19, Yeshiva University hosted American diplomat and author Dennis Ross, who delivered a lecture as part of the Dr. Marcia Robbins-Wilf Scholar-in-Residence Program at the Benjamin N. Cardozo School of Law. Ross, who served as the director of policy planning in the State Department under President George H. W. Bush, as President Bill Clinton’s Middle East peace envoy, and as special assistant to President Barack Obama, spoke about his recent book, Doomed to Succeed: The U.S.-Israel Relationship from Truman to Obama (Farrar, Straus and Giroux 2015), winner of the National Jewish Book Award’s Gerrard and Ella Berman Memorial Award in History.

In his lecture, Ross provided an overview of the tensions existing in the U.S.-Israel relationship from 1948 to the present: from President Dwight Eisenhower’s erroneous belief that President Harry Truman had only recognized Israel’s independence for political reasons, to President Ronald Reagan’s suspension of F-16s to Israel in the wake of the Israeli bombing of the Iraqi nuclear reactor and siege of Beirut in the early 1980s and the Obama administration’s open disputes with Israeli Prime Minister Benjamin Netanyahu. Only during the Clinton era, said Ross, did the presidential administration view Israel as more of a “partner” than a “problem that had to be dealt with”—due, in part, to Clinton’s admiration for soldier-statesman Prime Minister Yitzchak Rabin.

Ross explained that there are three major assumptions, grounded more in entrenched belief instead of fact, that have been part of every administration since Reagan, and held mainly by the constituency that views Israel as a problem. The first assumption is that if the U.S. distances itself from Israel, it will gain from the Arab states. The second assumption, said Ross, is the flipside of the first assumption: that the U.S. will lose from the Arab states if it has a close relationship with Israel. But historically, argued Ross, when administrations distance themselves from Israel, “what they get are new demands.”

The third assumption, said Ross, is that solving the Israeli-Palestinian conflict is the key to solving the problems in the Middle East. Ross emphasized that he spent decades trying to solve the conflict, and that he still believes it is important to deal with it. However, “it’s not going to transform the Middle East,” he said. “If suddenly the Israeli-Palestinian problem disappeared, it wouldn’t stop Assad’s barrel bombs, it wouldn’t contain Iran or roll back ISIS, or end the proxy war in Yemen, or threats against Sisi in Egypt, and it wouldn’t put Libya back together again.”

Ross stressed that the U.S. must be aware of the motivations of Middle Eastern governments, and noted that most states are not currently focused on the Israeli-Palestinian issue. “We haven’t done a really good job of recognizing the priorities of those we want to partner with in the region,” said Ross. “We don’t always have to accept their priorities, but if we want them to play a certain role, we at least have to understand their priorities.”

Although Ross acknowledged that movement toward a two-state solution to the Israeli-Palestinian conflict is at a low point, he stated that there is no alternative. “You have two national movements competing for the same space,” he said. A one-state solution, he argued, would be “a prescription for enduring conflict” and “perpetual war,” as seen in other regions with competing national identities. 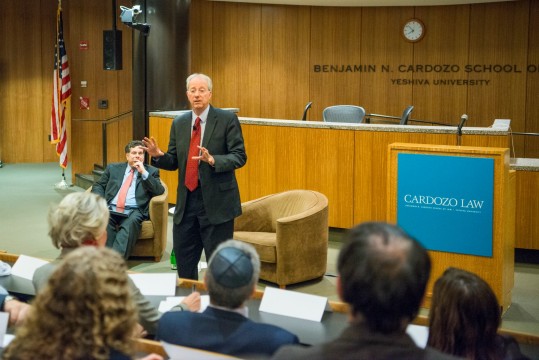 Ross said he remains “optimistic about the relationship” between the U.S. and Israel. He pointed to the countries’ shared values, such as women’s and gay rights, freedom of speech, and free elections, and the likelihood that the Middle East is likely to be characterized by turmoil for at least the next decade or more. “Israel stands apart—with all its problems,” concluded Ross. “You shouldn’t be complacent about it, but still, Israel stands apart, and the contrast of Israel in that region isn’t going to become less prominent; it’s going to be more prominent.”

“Ambassador Dennis Ross is uniquely qualified to speak about the U.S.-Israel relationship due to his three plus decades of government service as a policy analyst, U.S. Middle East Envoy and presidential advisor,” said Professor Bryan Daves, director of the Robbins-Wilf program. “I am thrilled that so many students had the opportunity to meet and discuss issues important to them with someone of Ambassador Ross’s experience and stature. I hope that it will inspire them to consider public service.”