“The greatness of Yaacov was his capacity to convene the sacred to empower everyday and to realize that without the everyday there is no need for the sacred,” said YU Vice President of University and Community Life Rabbi Kenneth Brander of the biblical forefather before introducing Rabbi Shai Piron, Israel’s current minister of education and former Rosh Yeshivat Hesder Petach-Tikva. “Rabbi Piron’s personal and professional life has always been about bridging holiness to the everyday.”

Rabbi Piron was greeted by a packed room of several hundred students and faculty members in Yeshiva University’s Furst Hall on Wednesday, November 13. His visit came only days after Danny Ayalon, the former Israeli diplomat and politician, was announced as the Rennert Visiting Professor of Foreign Policy Studies at YU for the spring 2014 semester.

Rabbi Piron opened his lecture speaking in English. “I hope that Israel can learn from the model of Yeshiva University,” he said in reference to YU’s unique synthesis of Torah and secular and scholarship.

After his introductory remarks, Rabbi Piron switched gears to Hebrew and playfully chimed in to assist YU alumnus, Yehuda Cohn, as he acted as a translator for the audience.

Throughout the lecture, Rabbi Piron described a variety of social and domestic issues facing Israel, explaining the grave challenges the country will face if they are not addressed. According to the minister, the societal clash between religious and secular Jews poses a greater threat to Israel than international security threats from Iran and Hezbollah. “We are becoming a fractured community with issues of identity,” he said ominously. 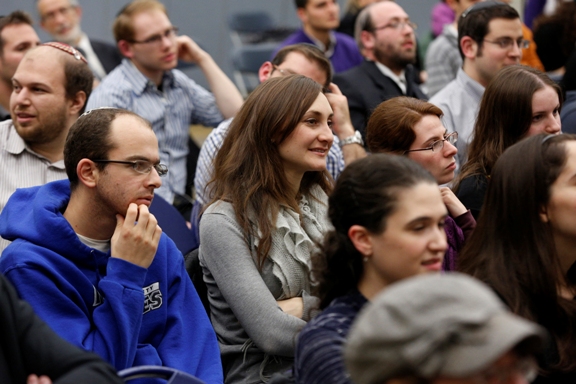 But despite his initial pessimistic overtones, Rabbi Piron remained comfortingly optimistic about Israel’s future. He described his first encounter with Yair Lapid, a secular Israeli Jew and the leader of Piron’s political party Yesh Atid. “His dream was to bring some Judaism to the secular; my dream was to focus on bringing some of the secular to the religious.”

After a few hours of conversation with Lapid in his friend’s house, Rabbi Piron said that, despite his initial hesitations about the meeting, he soon felt as though he was with “family.” This experience proved to him that Israelis have the ability to see past ideological differences to make Israel into a pluralistic and accepting “synagogue” for all types of Jews.

At the end of the event, students seemed to enthusiastically embrace Rabbi Piron’s call for Jewish unity. Ezra Barry, president of YU’s Israel Club, said that he found the lecture “very interesting and entertaining. The topics he spoke about were very eye-opening.”

Aryeh Younger is a senior at Yeshiva College majoring in English. His work has appeared in The Daily Beast, The Huffington Post and The Jerusalem Post.