Supreme Court Justice Antonin Scalia was a conservative icon, bon vivant, witty observer, music lover and an intellectual warrior. And yet above all else, Scalia valued character and faith. He never forgot the lesson his Italian immigrant father impressed on him: “Brains can be hired by the hour, just like muscles. Only character is not for sale at any price.”

In a lively conversation with Rabbi Dr. Meir Soloveichik, director of The Zahava and Moshael Straus Center for Torah and Western Thought, in a packed auditorium at the Yeshiva University Museum on December 11, Christopher Scalia—the eighth of Justice Scalia’s nine children—discussed his father’s life and legacy as seen through his new book, Scalia Speaks: Reflections on Law, Faith, and Life Well Lived. Co-edited with the Justice’s former law clerk Edward Whelan, the book is a collection of dozens of mostly unpublished speeches, some deeply personal, on subjects ranging from marriage and religion to sports and turkey hunting.

“Justice Scalia’s intellectual and legal legacy lives on in his legal opinions,” noted Rabbi Soloveichik, who described himself as an avid Scalia fan who was once a frequent reader of the website “Cult of Scalia.” Scalia’s legal opinions, said Rabbi Soloveichik, conveyed the Justice’s mind—which was a great mind. “But his speeches convey his heart, his soul, his faith, his humanity.”

Christopher Scalia, who lives with his wife and three children in Virginia, began compiling the speeches shortly after his father’s death in February 2016. The collection, he said, makes his father more accessible to non-lawyers, and gives a fuller picture of the man and his many interests.

“It was therapeutic and powerful,” Chris Scalia said of the process. “My father was such a good speaker, and his voice comes through in these speeches—his humor, his intelligence, his passion. It was like having him in the room again.” Rabbi Soloveichik noted that in the audio version of the book, read by Chris Scalia, the son sounds much like his father. “Years of imitating my father paid off,” said the young Scalia with a laugh.

Scalia—a former college professor of English who works at a PR firm in Washington, D.C.— talked about the lessons his father instilled in him, mostly through modeling, but also through stories. Justice Scalia was rejected by his first choice of schools, Princeton, and instead attended Georgetown; he came to believe that this initial disappointment ultimately made him a better person. Later, he was not offered the job he wanted as Solicitor General, but that put him on the path to the Supreme Court. “He used his personal experiences to show us that disappointment in personal or professional life can lead to something better,” Scalia said.

A brilliant writer and communicator, Justice Scalia attributed his skill largely to hard work. He often referred to a freshman English teacher who was heavy handed with the red pen. “My father learned how difficult good writing is, and he worked extremely hard at it,” said Scalia. “And when I was a college professor, he reminded me just how important a teacher can be and encouraged me not to lower my standards.” 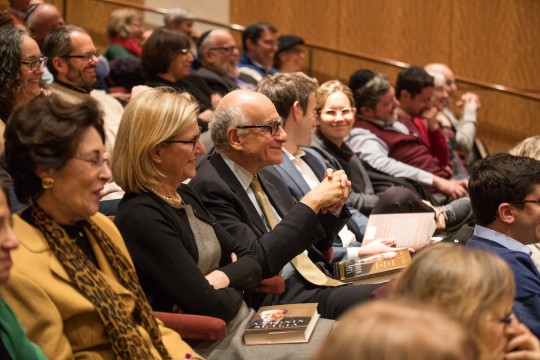 Justice Scalia grew up in a diverse neighborhood in Queens, and Scalia noted his father’s love of the country’s ethnic differences. “He appreciated differences the way people who say we should celebrate diversity don’t appreciate them at all,” he said. Justice Scalia joked about Italians and Irish (his wife’s maiden name was McCarthy), and even gave a humorous speech, “An Italian View of the Irish.”

Justice Scalia had an abiding love and appreciation of Jews. In a moving address at the U.S. Capitol during the annual Days of Remembrance commemoration for victims of the Holocaust, the Justice said: “You will have missed the most frightening aspects of it all if you do not appreciate that it happened in one of the most educated, more progressive, most cultured countries in the world,” of that period. Which suggests such an evil could happen again anywhere, and the only way to prevent that, he said, is “by acknowledging, and passing on to our children, the existence of absolute, uncompromisable standards of human conduct. Mankind has traditionally derived such standards from religion; and the West has derived them through the Jews.”

Indeed, Justice Scalia emphasized that intellectual brilliance is not enough. Scientific progress can fool us into believing that moral progression is also inevitable. “That is not the case,” said Scalia. “My father insisted that there must be certain uncompromised values, no matter how progressive we are in other ways.”

Virtue, character and high moral standards were what counted most to Scalia—traits he passed on to his children. “He rarely sat us down for Brady Bunch lectures, but he made clear the importance of conscience formation,” Scalia said. A committed Catholic—as are all the Scalia children, including son Paul who is a priest—Scalia was home every night for dinner, where he led grace. Although Chris and his siblings attended mostly public schools, their father drove them to church every week. And—like Orthodox Jews, noted Rabbi Soloveichik—the children were taught that there were some things that were and were not permissible. “Now I appreciate it more than I did when I was a kid,” said Scalia. “He didn’t lecture about Catholicism, it’s just that’s who we were. We had different standards than some of our friends, which meant missing out on some things.” 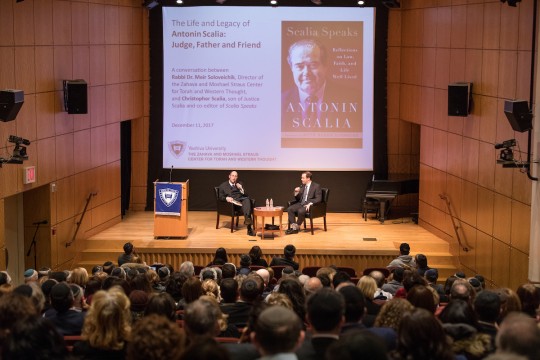 Blunt and with a scathing wit, Justice Scalia didn’t attack people, he attacked ideas. Indeed, this helps explain his longtime friendship with, and respect for, Justice Ruth Bader Ginsburg—who wrote the forward to his book—and with whom he vehemently disagreed. “They liked each other’s work habits,” said Scalia. “They both liked engaging in arguments. Not all judges were like that; some wanted to write their opinions and be done. Some wanted to go back and forth, and let their opinions be improved by those who disagree with them.”

His respect for character also helps explain why the favorite Founding Father of this learned man wasn’t one of the most brilliant and best educated Founders but instead a man with no formal education—the Founder renowned for his impeccable integrity: George Washington. “Washington was one of my father’s heroes,” Scalia said. “He didn’t seize power when he could have. He had great character. And my father understood that that’s what matters in life.”