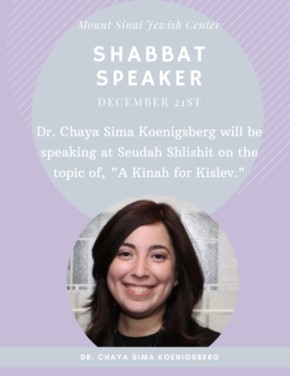 On Shabbat Parshat Vayeshev, our resident scholar Chaya Sima Koenigsberg delivered a Seudah Shlishit shiur at the Mount Sinai Jewish Center in Washington Heights to a full audience entitled, “A Kinah in Kislev.” Her lecture, which took place on the 23rd day of Kislev, commemorated the murder of the most well-known medieval Jewish woman, Dolce of Worms, who was killed on the 22nd of Kislev in 1197. Dolce was the wife of R. Eleazar of Worms, who authored the Sefer Rokeah and was the preeminent student of R. Judah the Pious, leader of the movement known as the Hasidei Ashkenaz.

In the aftermath of his wife’s murder at the hand of two Christian intruders, R. Eleazar composed a lamentation, a poetic elegy, organized around the verses of the Eshet Chayil chapter to commemorate her life and accomplishments. Dolce is described by her husband as an active force at home and in the community. She worked to support her husband’s scholarship and her earnings also paid for the teachers who were hired to learn with their children Torah. She cooked for the household and the yeshiva students and mended their torn clothing.

Dolce is also described as preparing materials for religious articles, like tzitzit and tefillin, sewing Torah scrolls, and mending torn religious books. She was active in the upkeep of the synagogue and teaching women to pray and leading them in prayers. Among her other activities described by her husband are beautifying brides, visiting the sick, and preparing the dead for burial.

There are very few texts that describe the lives and activities of medieval Jewish women, and this text is particularly rich as it touches on home life, economic life, childbearing, communal and synagogue life, ritual, as well as education and literacy. Dr. Koenigsberg presented Dolce as an inspiration and a paradigm of the many areas of family and communal life in which one person can be involved and how much a person can accomplish.