In Inaugural Lecture, Joe Lieberman Reflects on His Past Work and The Future of Jewish Politics

Former U.S. Senator Joseph Lieberman may have retired from politics, but his eye hasn’t strayed far from the political scene. On October 28, 2014, at Yeshiva University’s Wilf Campus, Lieberman addressed hundreds of YU students, faculty and staff in a lecture titled “Judaism and Public Service.” The lecture, the first of a three-part series, inaugurated Lieberman’s role as the Joseph Lieberman Chair in Public Policy and Public Service at YU, a position made possible through a gift from University Benefactors Ira and Ingeborg Rennert.

In his introductory remarks, YU President Richard M. Joel called Lieberman’s appointment, along with the recent addition of other prominent visiting professors such as Rabbi Lord Jonathan Sacks and Ambassador Danny Ayalon, “the icing on the cake of a fabulous faculty.”

Lieberman sees the new chair in public policy and public service as a significant part of YU’s mandate to provide a comprehensive education, secular and religious, to its students. “I believe that this chair has a unique and important mission in the years ahead, which is to help YU educate coming generations of Orthodox Jewish women and men in public policy and inspire and prepare them for public service.”

According to Lieberman, this political and public service-oriented education is particularly relevant now because of two recent developments: firstly, the “pulling inward of some segments of the Jewish community,” despite rabbinic injunctions to “go out and improve the world” in addition to one’s own community; secondly, because of demographic trends indicating that the Orthodox community may comprise the majority of American Jewry in coming years.

“I think [Orthodox people] will be called on increasingly to be representatives of the Jewish community to the general community,” including as elected government officials, predicted Lieberman.

Lieberman credited his Judaism with drawing him to politics. “In many ways, I would say Judaism called me into public service,” he said, expressing his belief that human beings are “God’s partners in improving and hopefully one day perfecting all that God created.” He recounted his influences and role models: the examples of extraordinary biblical leaders such as Moses, Abraham, Esther and Jonah; the lessons of Torah Judaism learned from his parents and rabbis; and political figures such as former Connecticut Senator Abraham Ribicoff, and the early leaders of the State of Israel, whom he described as a generation willing to “act and change history.”

Although he stated that he never consulted with any religious authorities about which way to vote while in office, Lieberman said his Jewish values still informed his political decisions. For example, Lieberman worked on issues like the environment (biblical Adam was charged with “protecting and guarding the Garden of Eden”) and protecting people from discrimination based on race, gender, religion or sexual orientation (because every person is “created in God’s image and has a birthright to freedom and opportunity”).

Lieberman also connected his Jewish values to his work following the terrorist attacks of September 11, 2001, after which he played an instrumental role in creating a new Department of Homeland Security. “[It] had a lot to do with the view in the Torah that there is good and evil in the world,” he said. “And if good nations lack the means…to defend themselves, evil will triumph.”

Lieberman said he never feared that his Jewish identity would hold him back in his career. “My parents really believed in the American dream,” he said. “They taught me and my sisters that, in America, you don’t have to change who you are and what you believe to be successful… and they were right.”

Lieberman represented Connecticut in the U.S. Senate from 1989 to 2013 after serving in the Connecticut State Senate for 10 years and as attorney general of Connecticut for six years. He was the first Orthodox Jew to serve in 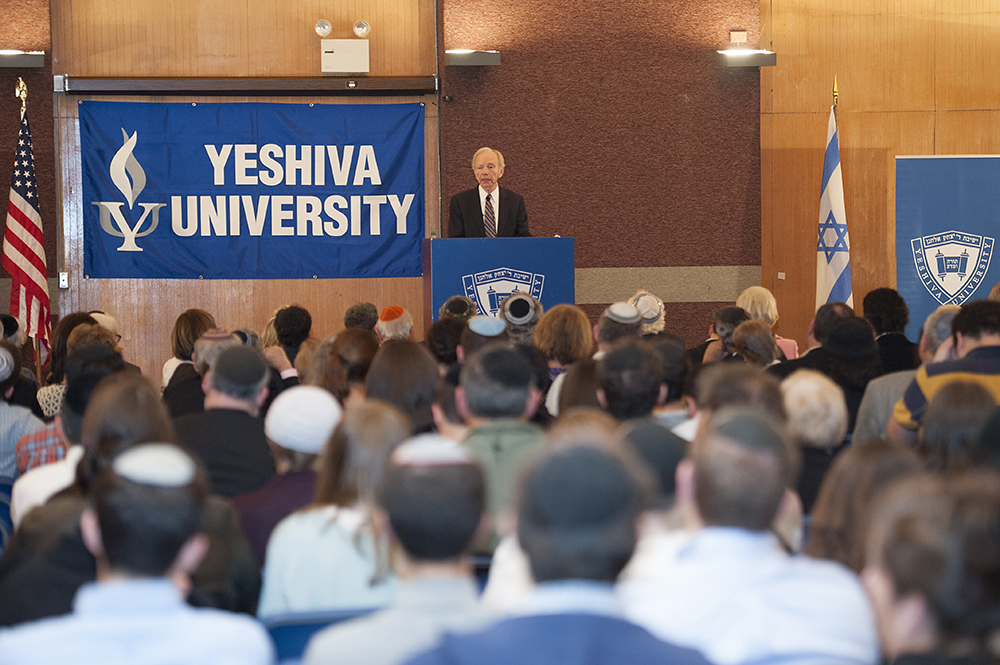 the Senate and—despite unnecessary “anxiety” among some segments of American Jewry about possible anti-Semitic backlash—became the first Jewish American to be named to a major political party ticket when Democratic presidential candidate Al Gore selected him as his running mate in 2000.

Lieberman also told several anecdotes illustrating the respect colleagues and voters accorded his (occasionally high-profile) Sabbath observance. “We’re blessed to live in a truly open country where anyone can go wherever their God-given talents will take them,” he said.

However, when asked about creeping anti-Semitism in America and its potentially adverse political consequences, Lieberman acknowledged the question as “unsettling.”

“I do have faith in America, and in the whole constitutional premise of this country,” Lieberman stated, with the disclaimer that he could not say the same “with confidence” about countries other than the United States or Israel. However, he expressed concern about rising anti-Semitism on U.S. college campuses and uncertainty about the Jewish political situation 30 years or so from now. “This [openness] is not going to [continue to] be this way unless we fight to make it so,” he said.

Lieberman will be teaching one course at YU in the spring. His next public lecture, “The Emerging Law of Cybersecurity,” is scheduled for Tuesday, November 18 at Benjamin N. Cardozo School of Law.