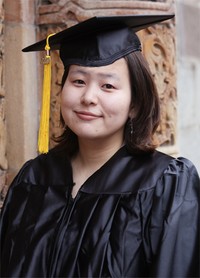 May 27, 2009 — The usual academic demands of graduate study were compounded for Younghee “Frida” Seo, a South Korean native who recently graduated with a master’s degree from Ferkauf Graduate School of Psychology’s Mental Health Counseling Program. She struggled with her English and with adjusting to a different culture; she was homesick for South Korea.

But Seo persevered, and thrived. Most notably, she established a new internship last June at the Asian Outreach Clinic of the Child Center of New York in Queens, doing much-needed work with Korean immigrants suffering from ADHD, depression and other mental health issues, and with children exposed to violence.

When Seo graduated with a bachelor’s degree in sociology from Ewha Woman’s University in Seoul in 2006, her professor suggested studying in the U.S.

“Experiencing the diverse culture in New York City sounded very interesting to me,” she said.

At first, Seo lived in Little Italy in the Bronx, “enjoying the fantastic Italian and Mexican food.” When she did her internship in Flushing, in an Asian-friendly neighborhood, she felt less homesick.

Professor William Bracero’s course on “Multicultural and Diversity Issues in Mental Health Counseling” opened her eyes, Seo said. “Listening to his lectures, I thought that I am not alone, as most migrant groups have undergone similar experiences in life–even harsher.” In Professor Irene Javors’ counseling skills and techniques class, Seo found inspiration for dealing with her clients’ issues at the Queens clinic.

Now that she has her degree, she hopes to continue her training in this country and eventually return to Korea as a mental health counselor.

Next profile: Ferkauf doctoral graduate saw Sichaun earthquake as a call to action