Genack has previously written of Lincoln’s special appeal to Jews: the nation’s 16th president enabled rabbis to serve as chaplains in the Union Army during the Civil War and canceled an order by General Ulysses S. Grant that expelled Jewish traders from several states. But in his YU appearance, Genack spoke of the secular dimensions of what he called America’s “greatest president and greatest politician.”

President Joel prompted Genack by asking, “Was Lincoln larger than life, or was he real?”

“The reason people around the world can relate to Lincoln is that he was dedicated to the idea of the dignity of man,” said Genack. “It wasn’t just a theory for him. What drove Lincoln was a moral conviction—his opposition to slavery. He thought that the founding fathers intended to ultimately abolish slavery. He once said, ‘No man is good enough to earn his living from someone else’s labor.’”

But Lincoln the politician, President Joel noted, could be vacillating, manipulative—even devious. Genack did not disagree. He cited Lincoln’s letter of August 22, 1862, to Horace Greeley of the New York Tribune, assuring the influential editor of the president’s determination to end the Civil War by any means necessary. 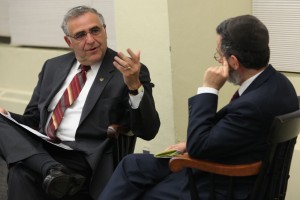 But according to Genack, Lincoln had already drafted the Emancipation Proclamation he would deliver exactly one month later.

Genack, spiritual leader of Congregation Shomrei Emunah in Englewood, NJ, went on to compare Lincoln to Judah, successor in the ancient Davidic line of kings over his seemingly stronger and seemingly preferred rival, Joseph.

“What we look for in a leader is not perfection,” Genack said, repeating a benediction he offered for the 2006 inauguration of Jon Corzine as governor of New Jersey, “but flexibility [and] the ability to admit a mistake, as does Judah.”

• At one point in the famous Lincoln-Douglas debates of 1858, incumbent Illinois State Senator Stephen A. Douglas accused his opponent of being a “two-faced” politician. Lincoln, not famously handsome, retorted, “If I was two-faced, would I be wearing this face?”