Yeshiva University will publish Books of the People: Revisiting Classic Works of Jewish Thought, an examination of the texts that have come to play key roles in the continuum of Jewish discourse. Sponsored by YU’s Zahava and Moshael Straus Center for Torah and Western Thought, the new volume is scheduled for release by Maggid Books, an imprint of Koren Publishers Jerusalem, on February 5, 2017. 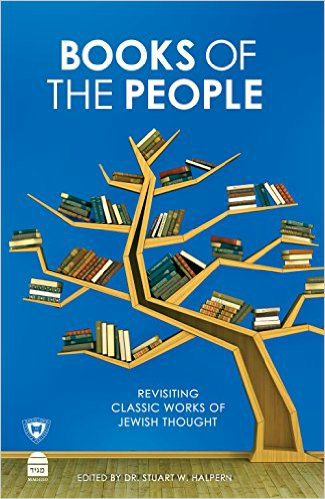 In Books of the People, contemporary scholars of Jewish studies examine ten foundational books written between the tenth and twentieth centuries that have dramatically influenced the development of Jewish thought. Each scholar revisits a particularly salient work and discusses its themes, historical context, the circumstances and background of its author, and its relevance to contemporary society.

“My hope is that this volume inspires the reader to make each of the works featured in its chapters a permanent part of his or her personal library, if they aren’t already, and if they are, to dust them off the shelf and revisit them with a new perspective,” said Dr. Stuart W. Halpern, editor of Books of the People and deputy managing editor of YU Press. “I fervently hope that this volume contextualizes while contemporizing, losing neither the vitality of the original works nor the concerns of today’s readers.”

“The mission of Yeshiva University’s Straus Center for Torah and Western Thought is to help develop Jewish thinkers and wisdom-seeking Jews by deepening their education in the best of the Jewish tradition, by exposing them to the richness of human knowledge and insight from across the ages, and by confronting them with the great moral, philosophical, and theological questions of our age. This new volume accomplishes just that by bringing the masterworks of Jewish thought to the masses,” added Dr. Halpern, also the assistant director of the Straus Center and the assistant director of student programming and community outreach at the Bernard Revel Graduate School of Jewish Studies.

Books of the People: Revisiting Classic Works of Jewish Thought is the newest addition to the growing list of innovative and substantial joint projects undertaken by YU and Koren Publishers Jerusalem. Over the last seven years, the partnership has released The Koren Yizkor: Memory and Meaning, the ultimate guide to Yizkor (the memorial prayer for the departed); a 20th anniversary edition of Rabbi Dr. Norman Lamm’s masterwork, Torah Umadda; the Derashot LeDorot series, a selection of essays based on the weekly sermons delivered by Rabbi Lamm early in his rabbinical career; The Philosophical Quest of Philosophy, Ethics, Law and Halakhah, a collection of essays by Rabbi J. David Bleich on a variety of topics relating to Jewish philosophical thought; a multi-volume set on topics of contemporary Jewish law, authored by Yeshiva University’s Roshei Yeshiva; and four volumes of the Mitokh Ha-Ohel series, a collection of original essays on the parashiyot (weekly Torah portions), haftarot (weekly selections from the books of the Prophets) and prayers for the weekday and Shabbat authored by rabbis and professors from every division of YU.