The pull of a good story is undeniable: anyone who’s ever burnt dinner after losing themselves in a book, a television show or a movie can attest to the power of a well-structured, well-developed plot. But how exactly do we get so wrapped up in a fictional experience that we forget what’s happening in our own lives? And is there more at stake than the occasional charred toast? 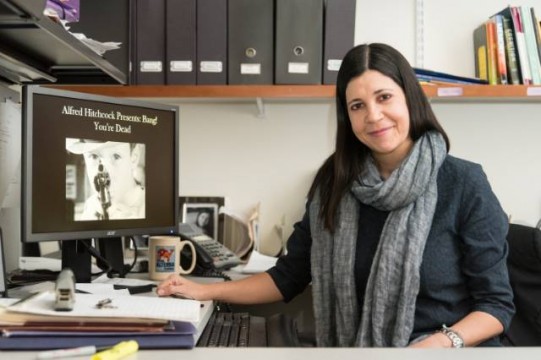 New research by Dr. Anna-Lisa Cohen, associate professor and chair of the psychology department at Yeshiva University’s Yeshiva College, has intriguing implications for these and other questions.

In an article recently published in the scientific journal PLOS ONE, Cohen details a study she conducted to examine the phenomenon of “narrative transportation”—when a person becomes immersed in a world evoked by a story because he or she feels empathy for its characters and is fascinated by its plot. The study’s premise was simple enough: Cohen showed two groups of participants a 20-minute Alfred Hitchcock film, titled Bang! You’re Dead, in which a 5-year-old boy wanders the city streets playing with what he thinks is a toy gun, but the audience knows is an actual, loaded gun, as his parents desperately try to find him before something terrible happens. Participants were told to raise their hand every time they heard the word “gun” spoken by one of the story characters; participants in one group watched the film in its normal and intact form, start to finish, while those in the other saw the identical film, but the scenes were presented out of order.

Cohen wasn’t sure exactly what to expect: “I thought maybe the group viewing the scenes out of order would perform more poorly at their goal because they had to work harder to piece together the plot of the film,” she said. Instead, she was amazed to discover that the opposite was true: participants who watched the intact film were significantly less likely to remember to respond to “gun.”

“There’s something about the scenes being in order, the sequencing of the plot unfolding as the director intended, that captures our attention,” said Cohen. “In the out-of-order condition, participants viewed the same emotional scenes and they understood the plot intellectually but they didn’t get transported by the story to the same extent, maybe because suspense, empathy and identification with story characters weren’t allowed to unfold in a natural way. You have to be emotionally engaged by a narrative, whether you’re reading it or watching it on film, before the suspension of your own goals, your world and even awareness of yourself can occur.”

What do Cohen’s findings suggest about human cognition? “I think that it’s kind of adaptive: for hundreds of years we’ve communicated using stories, and there’s something about story structure that’s very familiar to us,” she said. “Not knowing the end of a story captures our attention at the expense of our other priorities. It’s sort of built into us evolutionarily to attend to that story to find out what the ending is, which is what makes it so effective at transporting us.”

Understanding the latent power in these sequential, emotionally engaging narratives is key to understanding the role they play in influencing everything from our consumption of news to our attitudes about philosophical beliefs and ideas, according to Cohen.

“When you transport people with a narrative, their goals and motivations get replaced by what they’re viewing on the screen for a short time,” she said. “Imagine you’re watching a narrative film whose message emphasizes gun control and reform. Even if you normally were opposed to those ideas, you might find yourself identifying with the struggle of the protagonist, and feeling the emotions that they’re going through, and that may change your attitude for a short period of time. The potential for stories to change attitudes is hugely impactful. A lot of viral videos become viral by accomplishing the same thing: because they transport the viewer so effectively.”

The idea behind Cohen’s study originated with a Yeshiva College student in her experimental psychology course at the time: Moshe Rube ‘13YC. Rube approached her with the concept after being inspired by a lecture from a visiting Princeton University professor, Dr. Uri Hasson. “I’ve always been interested in how different types of art, like films and music, affect us—usually we experience movies as passive observers,” said Rube. “The opportunity to examine how we and our experiment subjects observe and experience movies was fascinating. Dr. Cohen focused our excitement into a well-built structure of psychological research.”

“We ran it as a preliminary study in my research class and it went really well, so I decided to pursue the idea,” said Cohen. After Rube graduated, another student in her lab, Elliot Shavalian ‘14YC, became interested in the premise and helped Cohen with additional research.

“One of the most interesting parts of this research was how immersive the linear narrative story was,” said Shavalian. “As someone who was working on the experiment and knew exactly what to look for, I found myself getting lost in the narrative multiple times.” For him, the experience was both instrumental in his development as a psychology major and enjoyable: “I really think that I got a better idea of what conducting research in the field of psychology is really like. Dr. Cohen is a great mentor and really worked towards helping me understand what our overall goal was and the implications of our research in everyday life.”

He added, “I’d tell any student interested in psychology that no matter what field you want to go into, it’s always worth it to have research experience like this under your belt—you’d be surprised how much you learn from and enjoy it.”