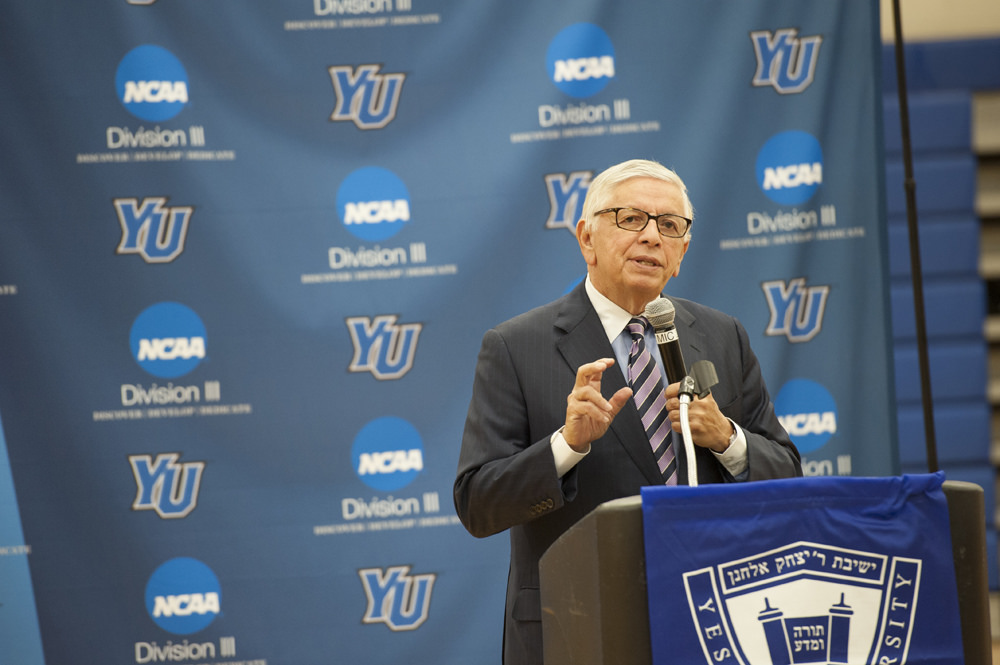 At an event organized by YU’s Sports Management student club, Stern reflected on his three-decade tenure as commissioner, which ended this past February, and how he transformed the NBA from a sports league to a global icon. Stern is credited for advancing the NBA’s operations, public service, global marketing and digital technology.

“I wanted to focus on the NBA as a place of opportunity,” said Stern of his strategy. “Whether you went to Grambling or Princeton, if you have game, you play. It’s wonderfully egalitarian.”

Stern described how he turned a sport into a business by building arenas and cultivating ticket sales and sponsors. He also noted that the NBA and basketball itself have become increasingly global pursuits, with 13 offices and 150 games played outside the United States, a worldwide fan base and online presence, and television coverage in 215 countries. “Sports has a way of engaging the world in one conversation,” he said.

Stern also shared his unique experiences traveling to South Africa with the NBA during apartheid rule as well as how he dealt with the league’s first major public case of HIV infection and issues of racism that players faced during his tenure as commissioner.

“The commissioner’s message is applicable to our student body,” said Max Stern (no relation), president of the Sports Management club. “If you work hard, things tend to work out. You can make an impact. If a student is serious about going into the sports industry, David Stern is certainly someone to learn from.”

After a round of questions from the audience about recent draft picks, sports gambling sites and digital analytics, Stern was presented with a framed YU Maccabees jersey by Max Stern, the presidents of the Sym Syms School of Business Student Council, and YU Director of Athletics Joe Bednarsh.

“It was a pleasure to have David Stern with us today,” said Bednarsh. “I was amazed to hear about his thought processes during difficult times for the NBA and to listen to his opinions about race in a major sports organization. His stories showed how athletic competition can make a real difference and change minds on an international scale.”