From Major League Baseball to Patient Advocacy, The Many Lives of Sy Syms Professor Bob Tufts

As his students know, Sy Syms School of Business Adjunct Instructor in Management Bob Tufts is a big man with a big heart whose single lifetime has encompassed vastly different roles and careers. From pitching in the major leagues to converting to Judaism, working in finance on Wall Street and battling cancer to become a fierce advocate for patients dealing with the medical system, Tufts has a wealth of experiences to share in the classroom.

His baseball career began in Lynnfield, Massachusetts, thanks to his brother Bill, four years his senior. “He was an All-State pitcher in Massachusetts and had a scholarship to the University of Florida, and he had teams that were trying to sign him as well right out of high school—he was that good. So, I tagged along and played a lot of baseball against kids who were older than I, and it made me sharp.” By the time he was in ninth grade, Tufts was working his way into playing American Legion baseball, having skipped the Babe Ruth League.

His brother ended up signing with the Chicago Cubs, “and Len Merullo, longtime scout for the Cubs, said, ‘You’ll probably get a chance, too, someday.’ I said, ‘C’mon, my brother’s so much better—this is ridiculous.’ And he said, ‘I’ll make sure that people know about you.’”

Word did get around the enclosed world of baseball scouts, and Tufts was admitted to Princeton University because of his athletic ability “even though I also had straight As and was a member of the National Honor Society.” At Princeton, he studied finance and built a solid pitching record, burnishing his skills in the summer by playing in the Atlantic Collegiate Baseball League in New Jersey. In 1976, when he started the season by winning his first five games, “all of a sudden, I’m getting phone calls from teams asking, ‘If you’re drafted, will you play?’ And I said, ‘Hell, yeah!’ Cleveland, Seattle and San Francisco called. And the San Francisco Giants drafted me in the 12th round on June 7, 1977.”

At first, Tufts was excited by his new life: “I’m off to Casa Grande, Arizona, for training, then off to Great Falls, Montana. ‘I’m going to see the world!’ My first game is played in Lethbridge, Alberta, Canada, and it’s, ‘All right, we’re taking a bus over the border!’”

But pro ball was not an easy life, and before long, it began to take a toll on his pitching arm. “Back then, we didn’t have pitching coaches; they just threw you out there to see what happened.” It also didn’t help that Tufts tended to throw pitches that had high torque, like sinkers and sliders, sometimes throwing 120 to 130 pitches a game. “It’s not a natural thing to put your arm back a hundred times and throw as hard as you can. The body is not meant to do that.”

By 1983, it was clear that this phase of his life was coming to an end. In 1982, he was traded to the Kansas City Royals, and then traded again on June 7, 1983, to the Cincinnati Reds. By September of that year, he was granted free agency. It was time to find another path.

Interestingly enough, while playing ball, Tufts was already seeking a new way forward with his life: in 1980, he began the process of converting to Judaism.

Tufts was raised in the United Church of Christ, but as he said in a 2007 lecture at the Yogi Berra Museum and Education Center, he, along with his family, “were upset with the way the Protestant church was going. The church left me more than I left the church.” This shift away from Protestantism was also a historical movement for Tufts, since his family traced their origins in the country back to the 17th century.

Many things about Judaism attracted him. “Having a personal relationship with God and the imperative to take responsibility for your life and do simple good deeds spoke to me. But the religion is evolving and intellectual, and I enjoyed that fact as well. I enjoyed all these sages and all these people taking individual words and moving them, shaping them, looking underneath—trying to put sense into a world, trying to put things into a package that people can deal with.”

He underwent conversion at the University of Virginia (UVA), under the guidance of Rabbi Sheldon Ezring, then head of the school’s Hillel. His soon-to-be-wife, Suzanne, whom he’d met at Princeton, was studying at the law school, and in the off-season Tufts worked as UVA’s assistant sports information director. He completed the process in 1982, and in November of that year, he and Suzanne were married in a ceremony officiated by Rabbi Ezring at the Prospect House on the Princeton campus.

By 1984, he was enrolled in the MBA program at the Graduate Business School of Columbia University while Suzanne worked for the law firm Weil, Gotshal & Manges. “Having been out of school for a while, it was not easy at first. But I was so dedicated to my studies, and like most things in my life, I went a bit over the top,” he said, getting on the bus at Sutton Place and East 54th and switching to the uptown bus on Broadway so that he could have study time as he made his way to the Columbia campus.

Pursuing a business degree was a good fit with Tufts’ life. Not only did he study finance as an undergraduate, he had also had a long apprenticeship under his father, William. “My dad—you’ll never see this again—worked 33 years at the same small savings and loan company in Revere, Massachusetts. I added up the checks by hand, sorted them by digit code. We knew everyone, and everyone knew me. We had our colorful stories—the gamblers who would come in and peel off hundreds to pay their mortgages—but never a fraud, never a bad check, because everyone knew everyone.”

After graduation, Tufts went to work on Wall Street “at multiple firms that no longer exist”: Thomson McKinnon, Lehman Brothers and Bear Stearns, to name a few, then took a position on the equities side at Jefferies. But working on futures, foreign exchange and trading, and U.S. equities for international clients began to get dull, and Tufts became frustrated because “I wanted to do something of value.”

He needn’t have worried: just as life had brought him the gifts of pitching, Judaism and Suzanne, it had something else in store for him.

“I was never sick a day in my life, never missed anything, but in 2009, when I was taking my daughter Abigail on her school visit trips, I started getting sick, not just for a day but for two or three.” A blood test came back with a very high iron count, and his doctor told him he needed to go to an oncologist, who told him he had myeloma, a blood plasma-related cancer with a very high risk of mortality.

By this time, the doctors estimated that 30 percent of the bone cells in his hip, pelvis, and lower spine were cancerous, so treatment needed to start immediately. After a therapy that stabilized his condition, he was prepped for an autologous stem cell transplant, in which his own blood-forming stem cells would be collected and stored and then given back to him after treating them to kill the cancer. During the prep they discovered that Tufts had been born with only one kidney, which meant that they had to be extra-cautious about keeping his hydration level high and constant.

After five weeks of a process that Tufts described as “rebooting me with my own cells,” he got to come home on his 54th birthday: November 2, 2009. Since then, he has been under a variety of regimens to keep the cancer muted and non-toxic.

As he recuperated, Tufts thought a lot about what to do next, especially about doing something that would add value to his life and the lives of those around him. The answer to that question was embedded in his family’s genealogy: teaching. “My family is generations of teachers—we can go back to the 1820s.” Tufts recounted a story about his grandmother, who taught physics in the 1920s in New Haven, Connecticut, even though it was considered “improper for a woman to teach physics.” Nevertheless, she persisted: “She was a pistol.” 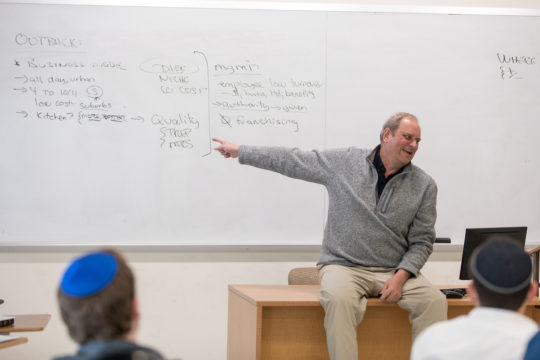 So, teaching it would be, and in 2010, Tufts worked as an adjunct in three schools, including Yeshiva University, where he taught a sports marketing course for Sy Syms. “I wanted to find a place where I could do more for students,” he said, and at YU, he found a more entrepreneurial atmosphere, which fit him perfectly.

He peppers his Sy Syms students with questions and challenges them the way he used to challenge batters with his specialty sinkers and sliders as he helps them navigate the principles of marketing, leadership and entrepreneurship.

“Their religious studies bring so much to the classes I teach—that cognitive habit of taking things, looking for new meaning, questioning, makes it stick in their heads—they’re good secular thinkers, they’re good religious thinkers, but above all they’re good people.”

The students reciprocated his love by awarding Tufts the Lillian and William Silber Professor of the Year Award at this year’s Gala Awards Dinner. 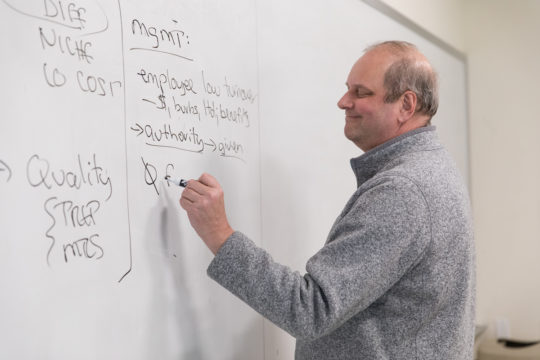 These days, Tufts leads a busy life along with his teaching. He never really left the world of baseball even after he retired. He has served as president of the New York State Chapter of the Major League Baseball Players Alumni Association and conducted baseball clinics in Cooperstown for Jewish Major Leaguers, Inc. and in Israel for the Israel Association of Baseball. He has written columns on baseball for Examiner.com, editorials on sports for major newspapers and an essay for the ESPN book Fathers and Daughters and Sports. He has also appeared as a panelist at the National Baseball Hall of Fame and Museum, the Yogi Berra Museum, the 92nd Street Y, Temple Emanu-El, the Museum of Jewish Heritage and the Isabella Freedman Center.

Tufts also is also a vigorous advocate for patients’ rights. His columns on cancer care and health issues have appeared in major publications like The Hill and Huffington Post. He has appeared on panels on behalf of patients at medical conventions such as American Society of Hematology, American Society of Clinical Oncology, Biotechnology Industry Association and Closing the Gap Now. “My two core talking points are these,” he said.  “First, we want patient and doctor access and choice in medicine—we want the right treatment at the right time for the right patient. All the restrictions that deal with these have to be justified, or they should be gone.

“Second, innovation is crucial, such as the proposal to use artificial intelligence to scan patient narratives to cut the time frame for drug development and reduce risk. With the right innovation, we will end up with cheaper drugs and more drugs, or we’ll end up with the same amount of cost to the system but better targeted care, which saves money in the long term.”

Tufts’ short-term plans? “I hope to spend parts of the summer at Rockport, Massachusetts, where I can write and bring my website up to date so that I can begin to disseminate my ideas,” he said. And just in case someone gives him a chance, he’s got a couple of lectures in his back pocket he wouldn’t mind giving, one on Jewish assimilation into American society through sports and one that traces the division of labor and management theory from Adam Smith to Moneyball.

His long-term plan is simple: “I want to teach here as long as I can. I love some of the changes going on at the school. Our department chair, Dr. Sharon Poczter, is wonderful, the department is going to grow and change, and there’s a lot more we can do to help students get on with their lives.”