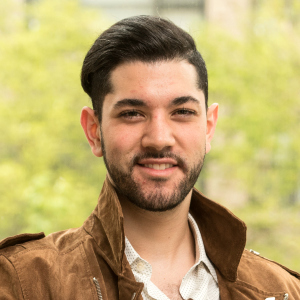 Isaac Telio-Bejar ’16YC spent his youth in Mexico City and, on becoming an undergraduate in Yeshiva College, immediately enrolled in Paul Glassman’s Architectural Design Process, the foundational course of the architecture minor.  He analyzed architect Mario Botta’s Casa Rotonda in Stabio, Switzerland, and developed his understanding of the principles of the house into a 300-square-foot hypothetical retreat for MacArthur Fellow Olivier Guyon, the French astronomer.

For a hypothetical small synagogue on the Wilf Campus, he adapted a Greek Revival prototype, Beth Elohim in Charleston, South Carolina.  And with SketchUp skills from Architectural Design Studio, Isaac created a three-dimensional visualization of a satellite library to serve Wurzweiler School of Social Work students.

After graduating in 2016, Telio-Bejar knew he wanted to stay in New York City for a master of architecture degree, and he was one of three Yeshiva College students who enrolled in the Bernard and Anne Spitzer School of Architecture at the City College of New York that fall.  Two years, later, in his Fall 2018 semester, Telio-Bejar was accepted to the Escola Tècnica Superior d’Arquitectura de Barcelona, studying with students from France, Italy, Sweden, Switzerland and Canada.  Included in the semester was an intensive curriculum of four courses: Housing Studio, Architectural Representation, New York/Barcelona: A Study of Urban Fabrics and Graphic Analysis of Natural Surroundings.

Telio-Bejar notes that the pedagogical approach in Barcelona differs markedly from the American method. “I found the teaching to be a lot freer, less focused on craft of drawings and models and number of hours spent producing them, and more on experimental creation of spaces that are functional and interesting. However, the attention from instructors is a lot less personal—there weren’t real desk critiques but rather more formal reviews.  Housing Studio focused on a residential building for over 150 people in the heart of 22@, an evolving neighborhood in the formerly industrial area of Poblenou in Barcelona.”

Telio-Bejar’s favorite assignment was the last project of Architectural Representation, where he explored the intersection of virtual reality and architecture. He created an interactive model of architect Ludwig Mies van der Rohe’s German Pavilion in Barcelona that visitors could walk within and explore, focusing on the representation of water, light and reflections.

During his summers, Telio-Bejar interned at Albo Liberis, an Israeli-Greek design partnership in Brooklyn.  And upon graduating in Spring 2019, Isaac quickly secured a position as junior architect with Lu Ning Architecture, a full-service firm that integrates green practices.