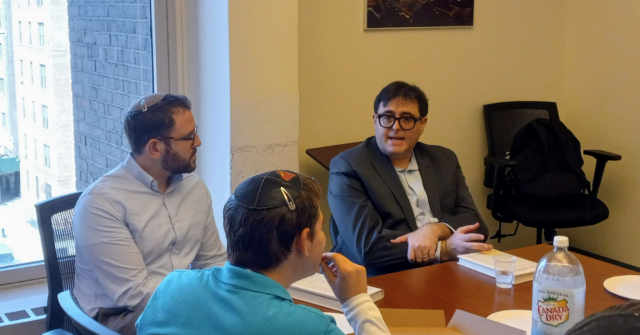 Literary critic, poet and Wall Street Journal editor Adam Kirsch visited Yeshiva University on September 21 for a conversation with students from the Zahava and Moshael Straus Center for Torah and Western Thought and the Jay and Jeannie Schottenstein Honors Program. Kirsch spoke with Straus Center Program Officer Tal Fortgang and a room full of Yeshiva College students about his book, Come and Hear: What I Saw in My Seven-and-a-Half-Year Journey Through the Talmud, and his series of columns for Tablet on his Daf Yomi (daily Talmud study) excursion.

Kirsch began by explaining what motivated him to take on the project of Daf Yomi as a non-Orthodox Jew, literary critic and novice in the world of Talmud study. He was inspired by the 2012 Siyum HaShas (celebration of the completion of the Daf Yomi cycle) and figured he could gain insights into what animated today’s Orthodox Jews, as well as how the ancient sages continue to exert an influence over Jewish culture—observant or not—today.

He immediately began receiving feedback on his discoveries, as chronicled in a regular column at Tablet. Kirsch reports hearing from yeshiva students and non-observant Jews alike, and began to see his mission as acting as a “scout” for people with backgrounds similar to his own—those who had not encountered the Talmud’s unique mode of argument or its assumptions about the intermingling of the natural and supernatural worlds.

Kirsch emphasized to the students in attendance that an element of Talmud study that stands out to an outsider is that the argument is often an end in and of itself. He also pointed out that because the Talmud is more than just a code of law—it touches on so many different topics, involves many indeterminate arguments and records many episodes not legal in nature—it allows Jews in every era to share reference points that can unify a people who may be geographically and philosophically disparate. For instance, the term “tikkun olam” meant one thing in the time of the Talmud, another thing in the Medieval era and another thing to many contemporary Jews. Whether or not Jews today are using the term in accordance with its original meaning, they still feel the need to ground their understanding in a term that resonates with other Jews.

Students eagerly peppered Kirsch with questions about the past, present and future of Talmud study. Kirsch noted in response that study of the Gemara is undergoing a renaissance today among observant Jews, academics and people simply interested in understanding the development of Jewish thought. He contrasted this renaissance with early American Jewish literature, which derided Talmud study as backward and barbaric, a symbol of the old world American Jews were leaving behind.

Today, he concluded, the Talmud is available in many languages, on many platforms, with many commentaries, at the push of a button. Whether the democratization of Talmud study will turn out to be good for the Jews or not is yet to be seen.

The event was the latest in a series sponsored or co-sponsored by the Straus Center and Schottenstein Honors Program. Recent events included a conversation with the Jerusalem Post‘s Zvika Klein and a dinner discussion with Tablet‘s Liel Leibovitz and YU’s own Rabbi Daniel Feldman.