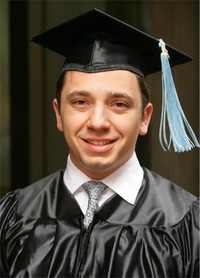 May 28, 2009 — Third-generation graduate Shlomo Eisenberg grew up hearing stories about studying at Yeshiva University from his siblings, parents and grandparents. But family history was not the main reason Eisenberg decided to attend Yeshiva College; he came for the intensive Torah study and the challenging honors program.

“YU’s dual curriculum has taught me to make every second count,” Eisenberg said of his demanding schedule. He was also involved in diverse extra-curricular activities, serving as the president of the Jacob Hecht Pre-Law Society, writing regularly for The Commentator, YC’s student newspaper, and chairing a committee at the University’s Model UN for two years.

Eisenberg’s deft juggling of his many activities will come in handy when the Los Angeles native attends Harvard Law School this fall.

“Studying law is somewhat similar to reading Gemara. From an intellectual perspective I find it very interesting,” he said.

Eisenberg is prepared for the challenges he will face in the predominantly secular environment at Harvard. “Yeshiva University has taught me to sanctify the mundane and apply the principles of Torah to the real world,” he said.