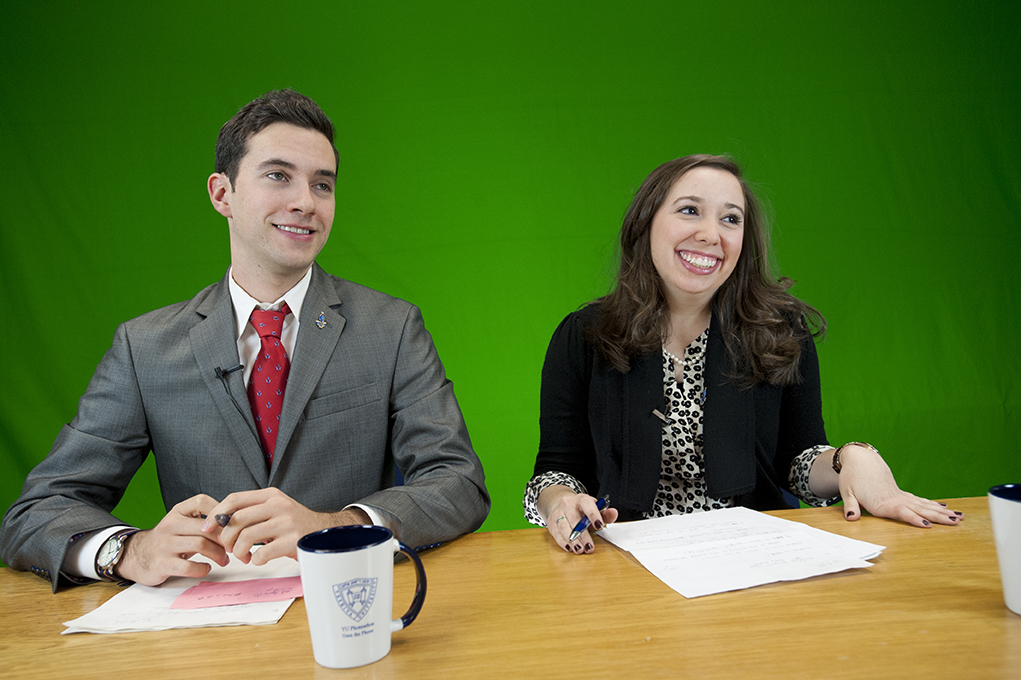 For instance, they’ve gotten their popular “Week at a Glance” videos, which keep YU students up to date on the academic calendar, extracurricular events and university athletics news, down to a science. In the beginning of the week, producer and Yeshiva College senior David Bodner takes a look at the YU Events Calendar, selecting the most talked-about upcoming events for a script to be built out by a team of student writers and writing editors. Then anchors Benjamin Scheiner ’14YC and Shimra Barnett ’15S join videographers Ari Hagler ’16YC or David Khabinsky ’14YC at the team’s studio in the Schottenstein Center, where they draw on many of the modern staples of broadcast news, such as a green screen and a teleprompter, to give their broadcasts a professional look and feel.

Scheiner and Barnett do take after take as Bodner watches, correcting them if they forget a line or prompting them to add something if it sounds better. Then Khabinsky, who also serves as video editor, works late into the night to perfect the film, cutting and editing until the team has a polished video that’s ready to help students on both campuses kick off their week when they check their inboxes Monday morning.

All in all, the enterprise has grown to include some 11 students and produce dozens of videos garnering hundreds of views each. It’s come a long way since the day in 2011 when Scheiner, then in his first year at YU, began thinking about a way to combine his passion for news and news-anchoring with his desire to raise school spirit.

“I thought a student news broadcast could really make people feel part of their school in ways they didn’t know they could be by making them feel proud and excited about all the good things happening on campus,” Scheiner said. “I also thought it would be a cool way to train students who were interested in video journalism, in roles behind the camera or in front of it, producing or editing videos.”

So, with then-fellow student Benjamin Shai ’12YC serving as his video editor, Scheiner put together his first video: a brief history of YU and a tour of the Wilf Campus. It was well-received, and in the year that followed, Scheiner slowly began to film more videos with the increasing collaboration of other students intrigued by his idea—Yehuda Silbermintz ’13YC helped with shooting and editing, Rafi Skier ’13YC drafted their signature music and logo. In the spring of 2013, Netanya Bushewsky ’13S signed on as Scheiner’s co-anchor, coining the team’s catchphrase “Here’s to you, YU” and bringing with her other Stern College for Women students who were interested in participating. Shield News coverage that year included breaking news coverage of Hurricane Sandy, interviews and feature stories.

But it wasn’t until Bodner and Khabinsky came on board that same spring that the team really solidified. In Bodner, Scheiner found an ABC-trained news producer: Bodner had interned in the community affairs department at the news station the summer before, where he wrote the weekend calendar script that anchors would read on air. Khabinsky also brought solid experience to the group, having secured an internship through YUCareerLink with a videographer for popular blogger Jew in the City the previous year. Both were passionate about news and video, and both were excited to bring their own ideas to the table to expand Shield News in new ways.

Week at a Glance was one of the first new features. “That came about because Ben and I were on the phone and I was looking at our schedule of classes, which is called ‘Your Week at a Glance,’ and I thought, ‘We can do this with events,’ ” Bodner said. 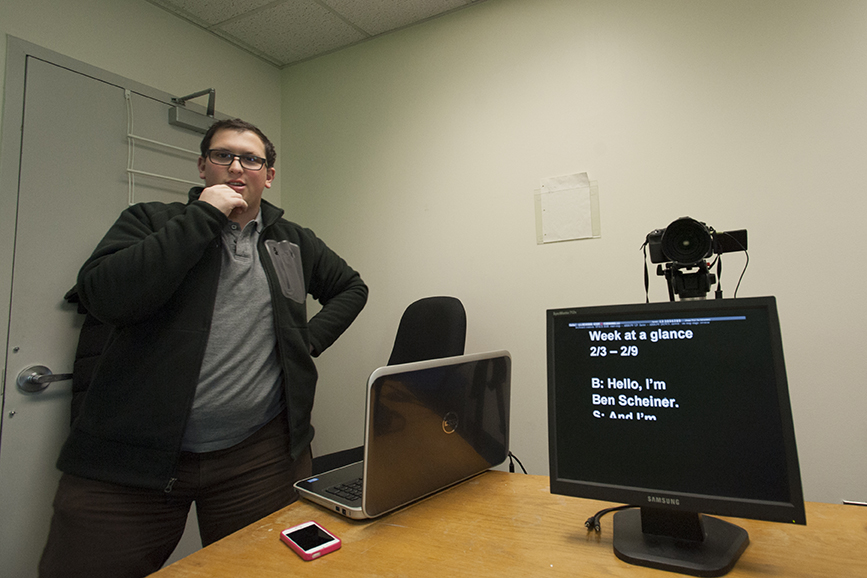 The team also began producing more “Shield in the Field” videos, featuring creative recaps and videos of fun or momentous University events, like the Seforim Sale, the Chanukah concert, Cake Wars (an event where students raise money for breast cancer awareness by participating in a cake-decorating competition), and the Cholent Cook-off (exactly what it sounds like). “Those videos are my personal trophies,” said Khabinsky. “In a technical and creative sense, we really do exciting things with them, and people who weren’t even at an event can watch them and see how fun it was. Editing the interviews afterward is also fun because you really get to see the passion that students feel at an event, which is difficult to capture when you’re writing or talking about it even a week later.”

Bodner agreed. “We share these videos and the people who ran the events share them too, and you can see how proud they are of what they’ve accomplished. It also helps build buzz for the next event—we’ll share our coverage of last year’s Chanukah Concert or Cake Wars and say, ‘We were there last year and we’ll be there again, are you coming?’ ”

When Barnett joined the broadcast this fall, taking Bushewsky’s place as the Beren Campus representative and Scheiner’s co-anchor, the team was complete. “I think it’s important to have that female presence there so women know that just because something is happening on the men’s campus, that doesn’t mean it’s not for them also,” said Barnett, who brought her experience as a stage actor to the role. “I also really wanted to be involved because I have a ton of school spirit and Shield News is about having school pride. It’s about how passionate we are about YU and how we want this to be something that helps students take advantage of their week and be proud of the university they go to.”

Looking back at the last year, the Shield News team is proud of their hard work, as well. Their videos are now featured in a special tab on YU’s events page and circulated widely on campus, and there have been some real coups. “I thought it was very cool that we had an interview with [musician] Alex Clare,” said Scheiner. “The guy has celebrity status. I was nervous to do the interview and do it well. From a reporter’s perspective, I was very proud that the administration was able to help us get that interview, that David [Bodner] coordinated it and I was able to execute it.” The interview received over 400 views.

“One of the biggest challenges for us is the Week at a Glance—how do we maximize the amount of information students can get out of these videos without making them too long?” said Khabinsky. It’s a balance every video editor must strike, and he knows it: “Doing Shield News has made me well-rounded because I can just create a standard video—I’ve learned so many shortkeys from creating these videos every week and expanded my technical skills so much.”

“This is actually a club that teaches you about your future, even if you don’t want to go into the news industry,” Bodner said. “I’ve learned a lot of responsibility and coordination. When you’re working with a group of people there’s going to be different views and you have to learn how to settle them and stick with a regular schedule.” 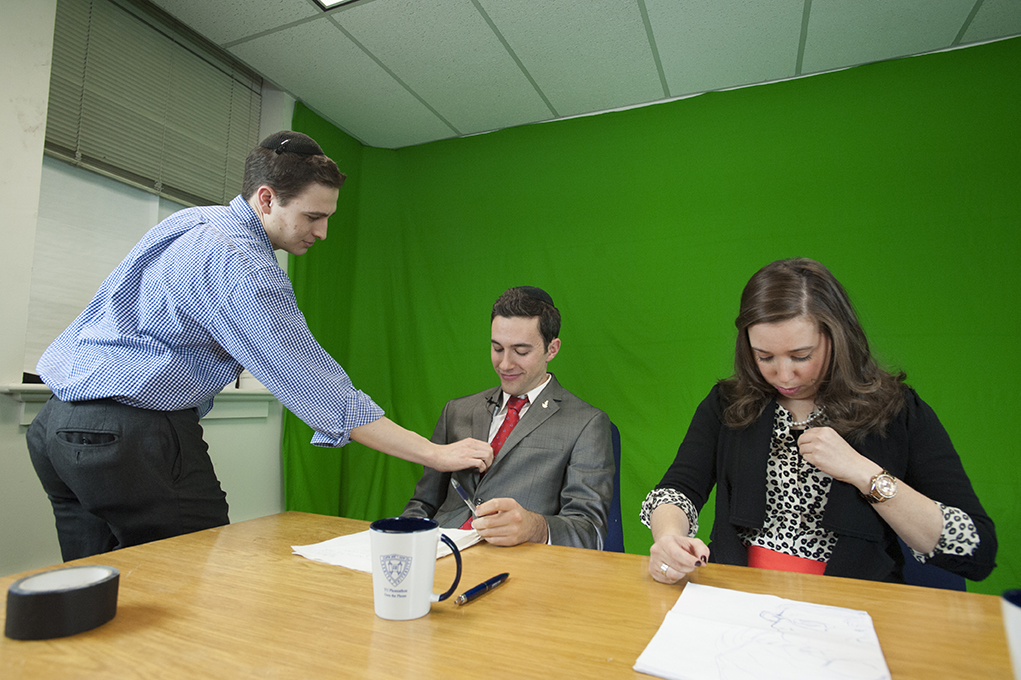 That’s been true for Barnett, who, unlike Bodner, Khabinsky and Scheiner, doesn’t plan to pursue a career in media. “I’ve definitely gained a lot of confidence from seeing myself on camera week after week,” she said. “I’m much more conscious of the way I act, what I do with my hands. What can you do with your body when you’re reading off the screen that’s exciting but not awkward? It’s totally different from acting on stage.” That being said, Barnett’s favorite moments with the group are when the camera’s not rolling. “The minute it goes off, that’s when we have the most fun. There was one time when I was talking about a Russian dollmaking event, and there was a Russian word I just couldn’t say, and we kept cracking up—it’s still a joke we all have today.”

For Scheiner, the whole experience has been a lesson in perseverance. “It’s hard to make something out of nothing, but if you really want it to exist, there are people who will stand by you and your idea, and it’s important just to stick with it,” he said. “We have an environment at YU where if you have the initiative and passion to create something, you can.”

As the new semester gets underway, Shield News already has an exciting lineup planned. They’ll be reporting live for three days from YU’s National Model of United Nations and covering Cake Wars and Yom Ha’atzmaut, among other events.

They’ll also be training a host of new students in everything from anchoring to video production as Bodner, Scheiner, Khabinsky and other senior members of the team prepare to graduate and hand the reins over to a new generation of Shield News. As Khabinsky put it: “The new horizon is that we’re not only learning, but teaching others what we have learned.” Barnett will stay on as lead anchor as she continues to develop her own style—“I’ve been watching a ton of Ellen, which I learn a lot from”—and draw on her background as a speech language and audiology major. “It’s all about the power of words, in the end,” she said.

As for Scheiner’s anchoring style, no surprises there: “It’s definitely a combination of Ron Burgundy and Stephen Colbert,” he said.

Want to get involved with Shield News? Email the team at theshieldnews@gmail.com and watch their videos.