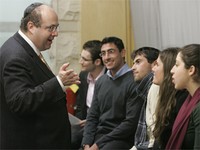 Stern College senior Laura Shuman was inspired by Friedman’s words. “Other people have told me to take an active role in politics,” Shuman said. “However, when the president of AIPAC says ‘get involved,’ it has a much greater effect.”

Speaking about threats facing Israel, Friedman asserted that Iran is still an existential and immediate threat to Israel, despite reports by the National Intelligence Estimate to the contrary. He also described in detail the intense daily hardship of life in S’derot, an Israeli town just north of the Gaza Strip that is constantly bombarded by rocket attacks from Palestinians.

“We mention in Tehillim (Psalms) that the ‘Guardian of Israel neither sleeps nor slumbers,’” said Friedman. “Well, we are the Guardians of Israel; it is our responsibility to protect our brothers in Israel.”

The increasing influence of the Muslim lobby in Washington, DC heightens the need for greater student involvement, he said.

On the question of dual loyalty between America and Israel, Friedman said that “AIPAC’s efforts are based on the assumption that a strategic alliance with Israel is good for America. We’re here as Americans, not agents of the Israeli government. We do what’s best for the US-Israel relationship.”

Jackie Saxe, AIPAC’s liaison to Yeshiva University, said Friedman’s visit was a recognition of YU students’ commitment to Israel. “It was a remarkable opportunity to hear from an incredible man who works daily to strengthen the vital strategic partnership between the United States and Israel,” said Saxe, a senior at Stern. “I cannot imagine a better way to start the semester.”