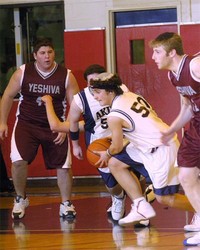 Weinbaum opened the game with a 16-1 advantage – but Akiva quickly turned it around and went on a 19-0 run of their own. After Akiva steadily built their lead through the middle two quarters, Weinbaum came all the way back in the fourth quarter, finally tying the game with two free throws by Danny Krasna. Jeremy Goodman then came right back and hit a three-pointer to give the lead back to Akiva, but Krasna tied it again on a conventional three-point play.

With 9 seconds left, Dovie Lamet fouled the leading scorer of the game, Ben Berlin, sending Berlin to the line for a one-and-one. Boca coach Jon Kaweblum called a timeout to ice Berlin, but he hit the first free throw. Kaweblum then called a second time out, but Berlin hit the second as well. Akiva then surprised Boca by coming out in a full-court press, and the gamble paid off when Berlin stole the inbounds pass. He was then fouled and hit one of two free throws, solidifying the win for Akiva.

Berlin led all scorers with 23 points, with teammate Daniel Teger close behind with 12 points. Krasna had 16 points in the losing effort for Weinbaum.

Akiva advances to a second Tier II qualifying game, which will be played at TABC tomorrow. That game will not be broadcast on macslive.com. Weinbaum will not play tomorrow.

Notes: Although Weinbaum was the higher seed, they chose to wear their road maroon uniform. Akiva wore white.