They milled about the room wearing badges with black-and-white photos and ribbons delineating their graduation year, receiving handshakes and hugs of recognition. On Thursday, May 30, 2019, nearly 100 alumni descended on Abigael’s on Broadway to celebrate their 50- and 60-year anniversaries since graduation. Many were still buzzing about their opportunity as reunion-year alumni to march with deans and faculty at Yeshiva University’s 88th Annual Commencement, held earlier that afternoon at the Hulu Theater at Madison Square Garden. 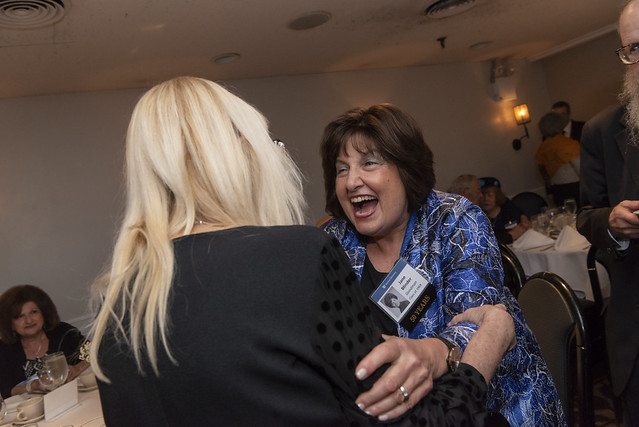 For some, it was a double simcha [gladness]. Hillel Goldberg ’69YC was on stage in his alumni robes as he saw his granddaughter, Rachel Shulman, cross the stage to receive her own diploma from Stern College for Women. He quickly asked someone to grab a photo of the two of them.

Graduates of Yeshiva College and Stern College Classes of 1959 or 1969 may not have sat in campus classrooms for decades, but many had returned several times as their children and grandchildren received degrees from YU’s high schools, colleges and graduate schools. Others have long been involved in board and other leadership positions, coming back regularly to support YU in various ways. And many have attended previous reunions where they had the opportunity to reconnect with former classmates and their alma mater.

“The friends you develop are an important part of being a student at YU and Stern,” said Gerald Kranson ’69YC, who met his wife, Annette (Zimmer) Kranson ’69S, at a party in New York the year following graduation. Despite both being sociology majors, they had never crossed paths as students.

The Kransons were among several YU couples in attendance. YU Board of Trustee member Julius Berman ’56 YC, ’59R met his wife Dorothy (Gewirtz) Berman ’59S at YU and went on what Dottie calls a “half” blind date. “He saw me at a party and called me, so I asked two women about him. They knew him from home in Hartford, Connecticut. I guess they had good things to say!”

Roberta (Daina) Fishhaut ’59S agrees. “We knew everybody,” she explained as she sat with a group of friends she has been close with for more than six decades. “It was like a family.” Her graduating class of 28 women was Stern College’s second, as the school had been established five years earlier in 1954.

At that time, many Yeshiva College and Stern College students attended organized chagigot [festivities], where they had the opportunity to celebrate and meet one another. “We had a great social life with the fellows from YU,” remembered Joyce (Cohen) Weitz ’59S.

“There was no dorm then; we stayed at a hotel on Madison Avenue and 37th Street,” recalled Roberta, who said that Stern College students occupied a floor and a half when she started school but had grown to inhabit three floors by her graduation. “There were very strict rules, and we had dorm mothers. If we had a date, we had to sign out when we were leaving, who our date was and when we would return.”

Roberta met her husband, a graduate of Rabbi Isaac Elchanan Theological Seminary’s (RIETS) Class of 1959, at a YU chagiga. They had three children who, following in their parents’ footsteps, graduated from their alma mater.

Ginger (Prager) Socol ’59S can boast that her husband and children are alumni of YU schools but also that her husband, Dr. Sheldon E. Socol, held an important professional role, serving as vice president of business affairs for 51 years. She recalled her classmates with fondness, laughing at the yearbook quote her roommates chose for her: “She was a vixen in her youth. Though she be little, she be fierce.”

For many alumni, attending YU is a family tradition, with fathers, siblings and children who share that connection.

“My father, Rabbi Dr. Joseph I. Singer, came to YU for high school from California at the age of 13. This was during the Depression, and he was only able to go home every two years,” explained Vivian Singer ’69S. “He then went to Yeshiva College and received semicha [rabbinic ordination] from RIETS before continuing on to get his PhD from Dropsie College [now the Herbert D. Katz Center for Advanced Judaic Studies] in Philadelphia. He was an instructor at Stern when I was a little girl. I would sit in his class, and the girls would fawn over me.”

Following her graduation from Stern College, Vivian received a fellowship to the Columbia School of Social Work, and in 1973, she became the first American social work volunteer at what was then the Hadassah Medical Organization in Israel.

Rabbi Ira Kronenberg ’69YC, a graduate of the Marsha Stern Talmudical Academy/Yeshiva University High School for Boys (MTA), Yeshiva College, Bernard Revel Graduate School of Jewish Stuides, RIETS and the Wurzweiler School of Social Work, noted that he had a “son who went to MTA and YU, a daughter who attended Stern and Wurzweiler, another daughter at Stern and two grandsons at MTA.”

A military chaplain for three years, Rabbi Kronenberg did active duty at Fort Riley in Kansas and served in the reserves for 28 years. In 2003, he was mobilization chaplain at Fort Dix in New Jersey, and in 2005, he spent over a year in Afghanistan and Iraq. “I spent two Pesachs, two Rosh Hashanas, Yom Kippurs and Sukkot, and one Hanukkah there.” On his retirement from the military, he was awarded the Legion of Merit, a medal given to military personnel for exceptionally meritorious conduct in the performance of outstanding services and achievements.

“We come together as friends with shared values and shared education,” Dr. Ari Berman, President of Yeshiva University, told the gathering. “A key strength of YU is our connections with alumni and friends. It’s a lifetime network of support.”

Regardless of their journeys, the night brought them together again to reconnect and to remember.

“All of us have had these kinds of journeys and over and over—as we make choices, wind down a road, feel lost and seek to find our way, we realize that there is a compass guiding us, driving us and pulling us,” Perry Davis ’69YC said.

“We don’t think of that compass enough. But like today, when I am reminded about this personal journey, I see the compass.  Not with a needle pointing to a magnetic North Pole with a big ‘N,’ rather to a spiritual magnetic force that brought us all where we are today—and that is marked with a big ‘YU.’ The greatest hakarat hatov [gratefulness] is owed by all of us.”