Yeshiva University alumnus Rabbi Elimelech Goldberg has recently been named a 2014 Top 10 CNN Hero for his work advocating the use of martial arts as therapy for children struggling with cancer and other childhood illnesses. His non-profit, Kids Kicking Cancer, uses the mind-body techniques of martial arts instruction, breath work and meditation to empower children beyond their pain. Fondly known as “Rabbi G” by the thousands of children his organization has helped over the years, Rabbi Goldberg, of Detroit, Michigan, also serves as clinical assistant professor in the Department of Pediatrics at Wayne State University School of Medicine.

Voting for CNN Hero of the Year continues through Sunday, November 16, and all of this year’s Top 10 CNN Heroes will be honored during “CNN Heroes: An All-Star Tribute” on Sunday, December 7 (8:00 p.m. ET) on the global CNN networks.

YUNews spoke to Rabbi Goldberg ’74YUHS, ’77YC,’81R about his time at Yeshiva and his work helping children battle the fear and pain of cancer.

Q.    Tell us about your experience as a student at Yeshiva University.

YU gave me a unique life view with powerful tools to live with a sense of spiritual purpose effectively. The four years I spent learning with the Rav (Rabbi Joseph B. Soloveitchik) totally shaped my being, and the other extraordinary roshei yeshiva, especially Rav Herschel Shachter, provided mentorships and role models that continue to inspire me so many years later. At the same time the tools of articulating our message to a world were provided by a secular education that has proven itself in so many of my life’s opportunities and challenges.

Q.    What is your background in martial arts?

I first became interested in martial arts because I grew up in the Bronx and I wasn’t that tall! But kidding aside, when I became the rabbi in Southfield, Michigan, I needed an outlet, and I’m not a runner or interested in racquetball. While at YU, I had already dabbled in martial arts with Professor Chaim (Harvey) Sober, a teacher of Hebrew language and tenth degree black belt. He is a great friend and mentor. I’ve since earned, over a period of 14 years, a first degree black belt in Choi Kwang-Do.

Q.    What inspired you to start Kids Kicking Cancer?

When I was teaching for YULA in Los Angeles, our first child, Sarah Basya a”h, was diagnosed with leukemia. She was an amazing little girl. She used to tell the doctors at UCLA, “No medication today, please.” She would comfort the kids in the clinic, telling them not to cry, and she would comfort me and my wife, too, telling us not to be afraid, and she loved us. She died at the age of two in 1981. 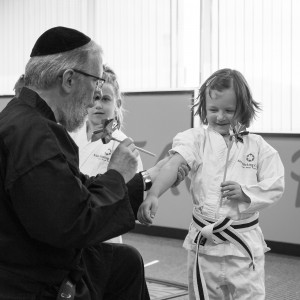 Seven years later, I was rabbi in Southfield and a gentleman who helped found Camp Simcha came to my house and asked me to direct the camp. I did that for 12 years; it’s an extraordinary place, and also where I came across medical reality that I lecture about. I met a five-year old from Texas having his port access for chemo, and he was screaming in pain. Nothing distracted him from it, and two nurses had to hold him down while another attempted to inject him with the medication. I told everyone to stop, and asked for five minutes with the child. They obliged, and when I was alone with him, I asked him if he wanted to learn some karate. Pain is a message, you see, and you can learn how to exhale that pain, and block it out, and inhale an amazing chi using techniques of martial arts.

This boy was so entranced by what I was teaching him that, 20 minutes later, he asked the nurse if she has taken out his needle yet. She had, minutes before he asked. I realized I had something there. In 1999, we started Kids Kicking Cancer with 10 children and now serve 2,500 kids a year in four different countries including the U.S., Israel, Italy and Canada. In 2002, I became the Rabbi Emeritus of the Young Israel of Southfield to devote more time and energy to Kids Kicking Cancer and, since then, the program has also expanded to include children facing pain from any other illness or chronic condition.

We offer one-on-one training and group classes in martial arts for both pediatric inpatients and outpatients in over 30 hospitals and institutions around the globe. In areas where we do not yet have programs, video conferencing lessons are available. It also offers transportation to and from classes, as well as counseling and individual support during hospitalizations and medical procedures. Before terminally-ill children pass away, they receive black belts embroidered with the children’s’ names and the words “Master Teacher” during ceremonies with their family and friends present. The ceremonies are sometimes held in big auditoriums filled with hundreds of people, or they may take place in small ICU rooms with immediate family crowded together.

The program also offers resources and services like special family events and outings, sibling support programs and group and individual parent counseling. All services provided by Kids Kicking Cancer are free of charge to the children and their families.

Q.    What are some of the challenges and rewards involved in this kind of work?

I’ll start with the rewards: Much more than we give the kids, they give us. They’re like little lights that imbue within us a tremendous sense of spirit of love and life. To be able to teach them to take control of their illness and blow out the darkness and bring in the light is so beautiful. Through the program, the children also take what they’ve learned and empower themselves by teaching other youths and adults experiencing sickness, pain or stress. Our catchphrase is Power, Peace, Purpose. Through martial arts, the kids find their inner power, the focused breathing techniques bring them peace, and through teaching others, they find great purpose.

The greatest challenge, though, is that what we do is so simple, but the thousands of kids we reach is still a drop in the bucket relative to the so many more other children in pain. It’s frustrating to know that there are children out there suffering and not to have more of the necessary platform to be able to reach them. We have over 4,000 “likes” on our Facebook page, but we want a million. We post pictures of the kids learning martial arts and at their ceremonies, and it’s so powerful for them to know they have people watching them and supporting them from all over the world.

You can visit our website, www.kidskickingcancer.org, and make donations there. You can also watch the CNN televised tribute on December 7, and you can help spread the word by voting for me at Voting for CNN Hero of the Year and by liking the Kids Kicking Cancer Facebook page.