On Oct. 6, 2021, Danny Danon, Israel’s former Permanent Representative to the United Nations, current chairman of World Likud and Yeshiva University visiting professor, launched his new Global Leaders Dialogue Series at Yeshiva University. The first event in the Series was a lunch and a Q&A session with students in the Jay and Jeanie Schottenstein Honors Program and the Zahava and Moshael Straus Center for Torah and Western Thought Straus Scholars Program. The visit was part of the ambassador’s greater efforts to build bridges in the world community and develop legal and diplomatic practices to combat the global and domestic surge of anti-Semitism.

Dr. Eliezer Schnall, director of the Honors program, began the session with questions regarding the Abraham Accords and the recent visit to YU of Dr. Shaikh Abdulla Al Khalifa, undersecretary for political affairs at the Ministry of Foreign Affairs and deputy secretary general of the Supreme Defense Council of the Kingdom of Bahrain. Danon called the treaty between Israel and the Arab nations the start of a “new and exciting era” and said he hopes more countries will join Bahrain and the UAE in normalizing relations with Israel.

“I am very grateful to the Honors Program for offering us a private audience with one of the key figures responsible for the growing dialogue and peace between Israel and Muslim nations around the world,” said Ari Rosenthal ’23YC.

Danon then spoke about his time at the United Nations, noting the difference between the “public U.N.,” which has been criticized for being biased against Israel, and the “private U.N.,” referring to closed-door discussions between top officials and diplomats. He said that many of the officials he spoke with off the record actually admired Israel and the Jewish people but were unable to say so publicly due to political pressure. 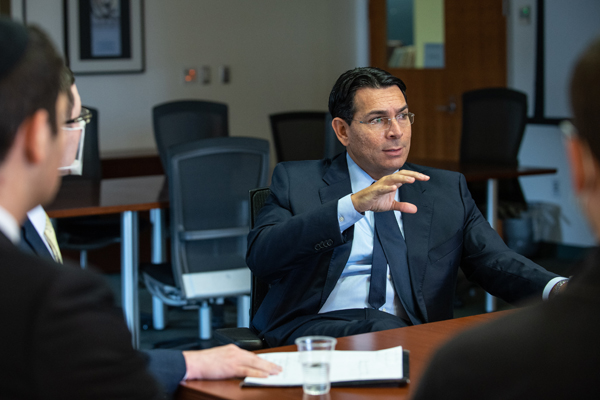 On anti-Semitism, Danon said that it is much easier to spread hate today with social media and that governments need to do more to combat the rising levels of hatred toward Jews. “They all say the right thing,” Danon said, but concrete “legislation” and “action” are needed. He also spoke about the recent battle between Israel and Hamas and the ensuing anti-Semitic violence it caused in America, noting that Israelis were “shocked” and “scared” to see their brothers and sisters attacked on the streets of New York City in broad daylight.

“It was an honor to host this insightful and important conversation,” Dr. Schnall said. “It is vital our Honors students hear from current world leaders so that they gain the necessary information, perspective and tools necessary to understand the complex world of international affairs and politics.”

Danon closed his remarks with a message to the students about the best way to succeed: “Don’t be quiet. Be creative and learn how to fail.”

That same evening, Danon engaged in a dialogue with Nazee Moinian in front of an audience of over 100 students in the S. Daniel Abraham Honors Program at Stern College for Women.

During the 2016 election, Moinian advised Secretary Hillary Clinton’s campaign as a member of its foreign policy advisory group on Iran. She previously consulted on Iranian affairs to the Council on Foreign Relations, where she interviewed foreign diplomats and acted as a liaison between the country’s political figures and their western counterparts. She and Danon discussed the latest developments in Israel, Iran and the Middle East.

“Ambassador Danon offered a fascinating glimpse into the behind-the-scenes and in-chamber workings of the United Nations as he recalled his time there representing Israel,” said Dr. Cynthia Wachtell, director of the S. Daniel Abraham Honors Program and research professor of American studies at Stern College.

“I really enjoyed the honors event with Nazee Moinian and Ambassador Danny Danon,” said Shoshanah Marcus ’21S. “Not only was their interaction compelling, but I was also intrigued to hear Ambassador Danon discuss events that occurred behind the scenes. I appreciate all that Ambassador Danon has fought for and done to support Israel.”