Senator David Peters is at the peak of his career: powerful and well-liked, he has just announced his presidential candidacy. So why does everything go wrong after that? 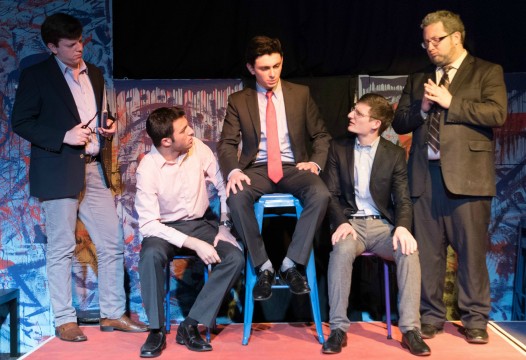 This question is at the heart of I’ll Be Right Here: A Modern Political Tragedy, a play written by current Yeshiva College student Etai Shuchatowitz and being presented on April 9-14 by the Yeshiva College Dramatics Society (YCDS). Set against the backdrop of American politics, it explores the tangled complexities of the definition of success, the desire for friendship and the cost of trying to make a difference as it traces Peters’ political downfall and mysterious death.

Shuchatowitz is clear that while the play has politics as its background, “the play itself is not about politics.” In high school he was moved by Arthur Miller’s Death of a Salesman: “The character of Willy Loman just struck a nerve, and it still sticks with me,” he said. What struck him about Miller’s aging salesman was Loman’s aching need to be liked and how that need distorted and poisoned everything he did.

“We can see some of that in David Peters,” Shuchatowitz said. “He wants to do what is right, and is willing to play the game to do it, but underneath all of that there is this other drive pushing him—about being loved.”  This is where Peters shares Willy Loman’s weakness for believing his own hype about his prospects and his future. Peters can’t believe that the people he thinks love him are just waiting to see what his next screw-up is going to be.

As Shuchatowitz explained, the tragedy of Peters is not his failures in and of themselves—every human being fails. “What makes it tragic is the way he fails, through a combination of ego, emotional vulnerability, and over-confidence.”

The play also has an original musical score created by Aryeh Tiefenbrunn, a Yeshiva College student with a background in composition. Schuchatowitz, Tiefenbrunn and producer Moshe Wigder worked together to trace out the play’s conflicts through sound.  Wigder sees the score as a vital way to illuminate the friction between Peters and his best friend, Thomas, who is left to make sense of David’s final actions. 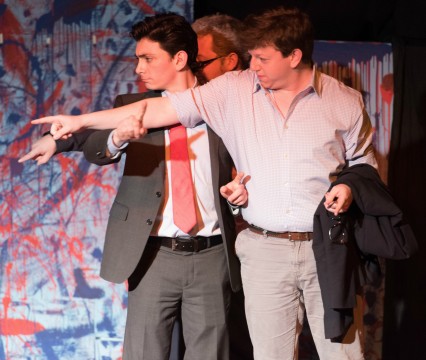 For the students involved in the production, the camaraderie and collaboration of YCDS are highlights of the play. Wigder noted that YCDS has helped him become a part of something larger than himself, and Shuchatowitz feels blessed to be working on something that calls out the best in everyone. Both remain committed to finding a way to follow their theater passions into the future.

YCDS has always been a place that gives students a literal stage to showcase themselves, and no more so than in I’ll Be Right Here: A Modern Political Tragedy. Tickets are available for purchase online.