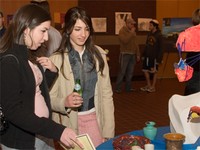 Dr. Adler is no longer the dean of Yeshiva College, he is now a university professor and special assistant for curriculum development and research initiatives
reporting to the vice president for academic affairs. But the program lives on both of Yeshiva University’s undergraduate campuses as a way for students to explore the arts and demonstrate their talents.

“The Arts Festival was conceived as a way to promote understanding of the arts and to provide a venue for students to share their work with their peers in a noncompetitive and halakhically sanctioned manner,” Dr. Adler explained.

This year’s festival kicks off with a free Jewish rock concert in Lamport Auditorium on March 29 at 7:30 pm. Aharon Razel, a sensational performer on the tail end of his American tour, will be performing, as well as Soulfarm, Midnite Remedy and Yaakov Dov Miller, Chaim Dovid’s backup guitarist and singer.

The festival will run through April 4. On March 30, student art work will be featured in Weissberg Commons in Belfer Hall on YU’s Wilf Campus beginning at 7 pm.

Women at Stern College who are interested in the arts will have a chance to perform in public Sunday, April 2 and Monday, April 3 at the second annual Stern Showcase.

This year’s Showcase has a royal theme. Each act plays the role of a different country, bring its gift of song or dance to the audience. The celebration begins both nights at 7:30 pm in the Schottenstein Cultural Center, on the Beren Campus.

Also on April 3, there will be an open-mic event at the Mendel Gottesman Library at 8:30 pm. Students from both campuses will read their poetry and prose.

The closing event is a classical music concert at the Schottenstein Theater on the Wilf Campus on April 4. Students from both undergraduate campuses will be performing.

This year’s is especially poignant for Dr. Adler. He has made a contribution to the Arts Festival in memory of his mother, Mary Adler Barricks, whom he credits for inspiring his love of the arts. Dr. Adler remembers attending the opera “Carmen” with his mother when he was 5 years old and being moved by “the pageantry of it all.”

In his new position, Dr. Adler is working with students, faculty, and administration to broaden YU’s presence in the cultural scene. YU is offering a course in film making in Israel this summer in collaboration with Ma’aleh School of Film and the university sponsored its first film festival in the fall on the Beren Campus. The university is also constructing a state-of-the-art communications laboratory, where students will apply principles of digital media development to courses in film, television, marketing, cinema studies, and political communications.

“YU brings wisdom to life,” stressed Dr. Adler. “Part of that is the development of the arts and sciences of communication and art in the 21st Century.”