Taylor Spoke About His Experience In Community Organizing 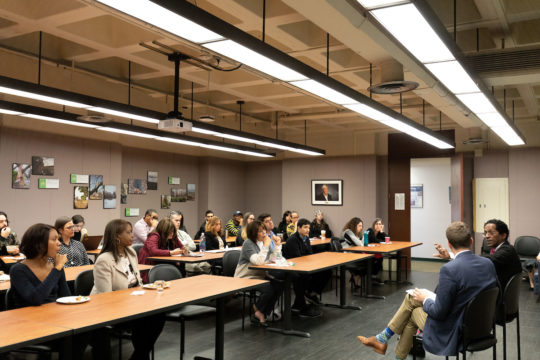 On Wednesday, October 17, Assembly member Al Taylor (D-71) spoke at Wurzweiler School of Social Work’s Lunch and Learn about community organizing and the New York housing crisis. As both a pastor and an elected official, Al Taylor has had experience with people when they are at their most vulnerable.

In Taylor’s district, much of the community cannot afford the rise in rents caused by gentrification. “In Harlem, if you don’t have money, don’t come knocking,” said Taylor. According to Taylor, one outcome of the increased cost of living is that one out of ten children live in a shelter and are commuting from the shelter to their public schools. In addition, many of his constituents live in public housing, which, while it may be a more affordable option, has many problems of its own, given recent news reports. He also noted that he believed the cold and brash way city officials deal with his constituents who are public housing tenants adds to the residents’ stress and to the mental health issues with which they have to deal. “You have to have a little courtesy and a little respect. Even if it’s not getting any better, you can speak better. You can bring people in on what’s happening. Tell them what’s going on and let them know.”

Taylor also spoke about his experience rallying the community as a pastor. Taylor leads a weekly prayer circle which anyone can attend: “Your religious background doesn’t matter—it’s about engaging a community for change.” He also often leads prayer walks, one of which found him walking from the United Nations to the south side of Chicago. His thinking was that if his prayer walks in the community were successful, why not try it on a bigger scale? “I’ve seen change, I know it can happen—so why not walk to Chicago?” Taylor’s friends and family were worried he wouldn’t be able to do it. He responded simply, “It’s just one step at a time,” but just to be safe, he started training. Within three weeks, Taylor was walking 15 miles a day.

Walking the approximately 780 miles to Chicago was very emotional for him. “I feared that being black, walking in some of these communities I would not be received.” But he was pleasantly surprised by how many of the people he encountered gave him food and water and even offered him money. “Everybody that I ran into wanted to contribute,” he said. “I was crying because I was received, and I thought I would be rejected.”