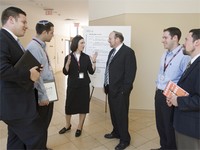 Jul 13, 2006 — As many Jewish day-school principals and administrators retire over the next decade, the profession will look to the next generation of Jewish educators to take their place. Most day-school teachers have never received formal training in school administration, and often find themselves struggling to balance teaching with new administrative responsibilities.

This issue was addressed for the first time at a Yarchei Kallah (gathering for learning) held in June in Teaneck, NJ. About 20 educators from six states participated in this conference, which aimed to create a strong network of talented Jewish educators and administrators.

The conference was organized by Support for Educational Leadership Advancement (SELA), an initiative of the Association of Modern Orthodox Day Schools and Yeshiva High Schools (AMODS) at the Center for the Jewish Future.

“This is the first step in preparing professional Jewish educators for the roles they will play as administrators,” said Toby Goldfisher Kaplowitz, SELA’s director.

To provide a more formal support network throughout the year, each participant received membership in the Association of Supervision and Curriculum Development (ASCD), which includes members of the entire profession of education.

“The SELA conference was a wonderful opportunity to interface with colleagues. It is the relationships we are developing as peers that will be most helpful as we strive to advance in Jewish education,” said Rabbi Daniel Loew, principal of the Hebrew High School of New England in West Hartford, CT.