Afterwards, they went on a guided tour of the campus. Ernest Miller ’67YC, attending with his wife Vivian, was glad to be back “to see old friends and catch up on great memories,” while Susan Amin ’67S, Rochelle (Sperling) Graubard ’67S and Toby (Engel) Schlussel ’67S spoke about how much they loved Stern and the lifelong connections they built there, and they all agreed when Schlussel stated that “at Stern, we were a sisterhood of women.” 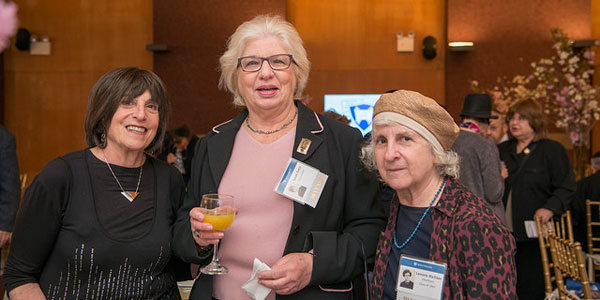 Joel Schreiber ’57YC, ’60R, ’60BR, the current chairman of the Board of Trustees for the Rabbi Isaac Elchanan Theological Seminary, recalled how his father suggested he attend Yeshiva University, saying “know how to learn Judaism now, learn about business later.” He acknowledged that his father was right because receiving his three degrees from YU “affected everything about my life and my values in a positive way.”

Lenore (Wolfson) Richter ’67S, ’69F, who met her husband Glenn while a student at Stern College, related how her experiences there oriented her towards a life of service. She was a teacher in the New York City public school system for 34 years and was active in many other service efforts, such as working with families from the Former Soviet Union. “I owe Stern College a big thank you,” she said. 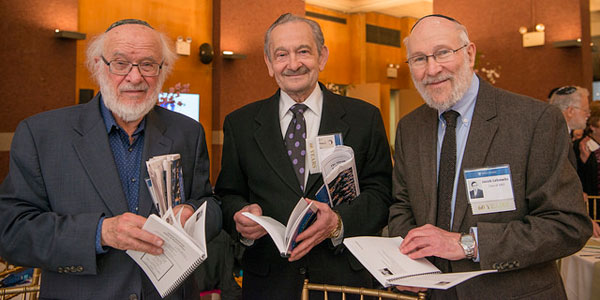 One of the elements that made the reunion event notable was a live video feed that connected the alumni living in Israel with their compatriots sitting in Weissberg Commons. Former President Richard M. Joel was able to address the people in Israel and new president Rabbi Ari Berman, in Israel, addressed the gathering on the Wilf Campus; alumni knew that while thousands of miles separated them, technology had brought them together for a joint celebration.

President Joel recited many of the University’s accomplishments to demonstrate that “the place is alive and dedicated to an integrated life based in the Torah” and that YU has always stood for “seeing as God sees and doing as God does.”

Rabbi Berman noted that the University owed President Joel a huge debt of gratitude for all he had accomplished over his tenure. “These accomplishments provide a firm foundation for the YU of tomorrow.”

After several touching reminiscences by both alumni and alumnae, the evening ended with a song composed by Joel Schreiber in 1956 that won a student council contest to compose an alma mater for Yeshiva College. Called “Golden Domes” (in reference to the rooftops of Zysman Hall), the lyrics celebrate that “where e’re your [YU] sons under heaven reside / They shall strive for both G-d and Man.” 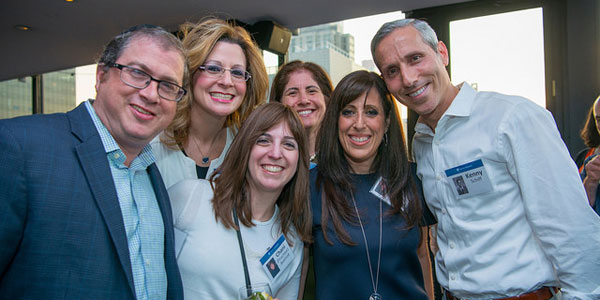 The class of 1992 met on May 28 for their 25th reunion at Prime at the Bentley on East 62nd Street. Simcha Axelrod ’88YUHS, ’91YC, ’94SB enthusiastically recounted all the YU connections in his family as a way of celebrating this reunion: his father, Dr. Morton Axelrod, ’53YUHS, ’57YC, ’61E; his wife, Chani ’92S; and his niece, Kayla (a 2017 valedictorian for the Rebecca Ivry Department of Jewish Studies). He also noted that his son, Ariel, is a Yeshiva College sophomore.

Susan (Schlussel) Meyers ’92S and Lisa Edelstein ’89YUHS, ’93S were two members of a four-roommate suite who have kept in contact for the past quarter-century, while Yoel Lichenstein ’92YC was excited at having the chance to reconnect with others he had not seen in a long time.

Rabbi Berman joined the festivities to offer a few words, noting that “it is real pleasure to be among so many people committed to YU” and thanked them for keeping the University the dynamic place that it is. He also asked for advice from those assembled, which led to a lively discussion about the need for more opportunities for men and woman to interact socially.

Deva (Schlass) Zwelling ’92S, ’94W and Benjamin Waltuch ’88YUHS, ’92SB (who traveled from Chicago and Israel, respectively, to be at the event) ended the evening with fond reminiscences about their lives on and off the campuses, with Waltuch saying that “we need to say thank to YU for all of the opportunities it has afforded us in our lives.”