When Daniel Lazarev ’16YC co-authored an article with Dr. Fredy Zypman, professor of physics at Yeshiva College, for a recent issue of the Journal of Electrostatics, it was the perfect expression of Lazarev’s lifelong passion for scientific investigation.

“I was a nerdy kid,” Lazarev said. “At the age of 6, I summarized science articles from an encyclopedia my mother brought home and ran ‘pseudo experiments’ in chemistry, like creating a ‘life potion’ which included aloe vera and sugar.”

He credits both his family and his faith for his vigorous curiosity. His parents were born in Kokand, Uzbekistan, a small provincial town in the former Soviet Union. They moved to Holon, Israel, in 1990, then finally to Toronto, Canada, in 2003.  “All this moving afforded me the opportunity to grow up immersed in an amalgam of Russian, Uzbek, Bukharian, Israeli and Western cultures and cuisines, and speaking Hebrew, Russian and English. This helped me develop a skill I later realized to be invaluable: that of relating to and communicating with those whose backgrounds are different from my own.”

When he undertook the process that would make him a baal teshuva [someone who assumes a religious lifestyle], he applied the same energy that went into summarizing encyclopedia science articles to his study of Jewish texts. “When I started learning Torah, first at the elementary Jewish day school I attended and then on my own, I was awestruck by both the depth and the breadth of the Jewish library,” he noted. “Looking back at my intellectual growth I am very thankful that I made this decision in my life, not only because I am sure it is the correct way of life, but also because I know that I would not have learned as much otherwise. “

Yeshiva College offered him a place where he could combine both of his loves, and so, at the urging of a high school teacher who was a YU alumnus, he made his way to New York City. Once on campus, he jumped into the physics program as a freshman and added a major in math as a sophomore. “I got into physics because I was always interested in the big questions of life, of the universe,” he said. “Physics may not be the best way to answer these questions, but it gives me many tools that I can use to tackle them. That’s why I developed a passion for math as well — it’s an important tool in physics and beautiful in its own right.”

An interest in medicine ran parallel to his study of physics and math, an interest encouraged by his parents, especially his mother, who was a doctor. “Medicine satisfies a different interest of mine,” he explained. “It comes out of a more practical consideration, where I can use specialized knowledge to contribute to society and help other people and save lives.”

The mix of these pursuits feeds the two sides of Lazarev’s intellectual journey: physics and math satisfy a desire for rigor and method while medicine (and the human biology that underlies it), though “messier,” affords him the opportunity to work on concrete projects that help people in concrete ways. 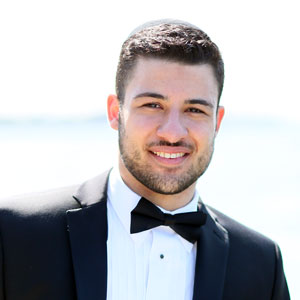 After graduating last year, Lazarev is teaching AP physics and other subjects at Yeshiva Rabbi Samson Raphael Hirsch in Washington Heights as well as physics labs at Yeshiva College. He is also investigating medical schools and PhD programs in physics and math. Ideally, he would like to pursue a combined MD/PhD program at a medical school.

Whatever he chooses to do, Lazarev would like research to be a component of it (prefigured by the 6-year-old summarizing science articles from the encyclopedia). The article he and Zypman published, “Determination of Charge and Size of Rings by Atomic Force Microscopy,” proposed an algorithm to determine the electrostatic charge and size of nanorings using atomic force microscopy. Nanorings function in many ways, such as in molecular pumps to link amino acids into growing peptides or as a possible medium to physically store qubits for quantum computing. The algorithm that Lazarev and Zypman created can be used by researchers to measure and identify nanorings quickly and accurately.

They have also collaborated on a second article, published in the June 2017 Journal of Electrostatics. Titled “Charge and Size of a Ring in an Electrolyte with Atomic Force Microscopy,” it also explores how atomic force microscopy can obtain information about an object’s charge when that object is embedded in an electrolyte. This is a challenge because counterions in the the electrolyte can shield the object’s charge.

They conclude that any instrument used to measure the charge of the object must account for the electrostatic problem caused by the electrolyte. They provide theoretical tools to analyze experiments and extract parameters such as the charge and size of the ring, the screening and the Debye length [which is the distance over which a charge is shielded by the ions in a solution].

This is the kind of rigorous activity that Lazarev values highly and which he hopes to pursue regardless of his path in life, a path given equally to the study of science and the practice of faith. “I was raised with the understanding that life has a purity and holiness,” he observed, “and the profession that safeguards it, virtue and dignity — that is worth devoting one’s life to.”