The commencement exercises of the Azrieli Graduate School of Jewish Education and Administration, held on Tuesday, May 14, 2019, in Belfer Hall’s Gloria and Jesse Weissberg Commons, celebrated the conferral of 31 Master of Science in Jewish Education degrees as well as three EdD degrees. 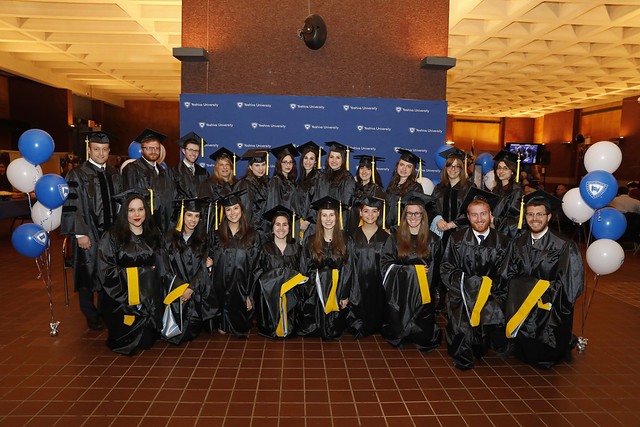 All the graduates of the Azrieli Graduate School carry forward the deep passion and respect that David J. Azrieli z”l held for Jewish educators and Jewish education.  The school was named in his honor in 1982. Dr. Naomi Azrieli, Davdi Azrieli’s daughter and a member of the YU Board of Trustees member, prepared a poignant videotaped message to the graduates underscoring the Azrieli Foundation’s commitment to the future of Jewish education.

The master’s degree graduates will serve in teaching positions in day schools and Jewish educational settings worldwide. The doctoral graduates will assume leadership positions within the field. Each of the three doctoral degrees, conferred under the Fanya Gottesfeld Heller Division of Doctoral Studies, include dissertations that will make an important contribution to Jewish education and the Jewish community. Hindy Shaena Cantor completed an important new work titled, “Their Summer Home: The Psychosocial Development of Jewish Emerging Adults in a Service Environment.” Jennifer Chana Glatt did original research on “High School Judaic Studies Teachers’ Attitude Toward Instructional Technology” and Hal Levy completed a thesis on  “Assessing the Technological Pedagogical Content Knowledge (TPACK) of Teachers in Modern Orthodox Jewish Day Schools.”

In addition to producing 70 doctoral graduates since 2006, the total number of Jewish educators prepared by the Azrieli Graduate School now exceeds 600. The Fanya Gottesfeld Heller Division has also awarded 19 educators with a specialist certificate for completing the coursework for educational leaders. This is a fitting tribute to the memory of Fanya Gottesfeld Heller z”l, an author and lecturer renowned for her support of Jewish education, with a particular focus on the Holocaust. Heller also served as a member of the YU Board of Trustees.

The evening was marked by powerful words and images. Dr. Rona M. Novick, dean of the Azrieli Graduate School, encouraged the graduates to embrace their responsibility as “influencers” who will touch the hearts, minds and souls of Jewish learners. “It is a heady responsibility,” she suggested, “but one which I urge you to embrace with all the tools and lessons you have learned at Azrieli.”

Addressing the graduates, Dr. Ari Berman, President of Yeshiva University, shared his personal journey to leadership. Holly Cohen, executive director of the Kohelet Foundation, delivered the keynote address, which was a passionate call for students in Jewish schools to develop meaningful relationships with God.

On display throughout the ceremony were graduates’ work, including dissertation abstracts and a collaborative culminating project on student-centered learning completed by the inaugural graduating cohort of the PELE fellows, a one-year master’s degree program funded by the Kohelet Foundation.

Perhaps the most powerful moments of the evening came as student representatives of the graduating class addressed those assembled. Their words of gratitude and their excitement and passion for the future inspired all in attendance.