Just a few weeks after finishing the spring semester, a group of 20 undergraduate men and women from Yeshiva University embarked on a nine day service mission to Odessa, Ukraine, as part of a program coordinated by YU’s Center for the Jewish Future in partnership with the American Jewish Joint Distribution Committee. 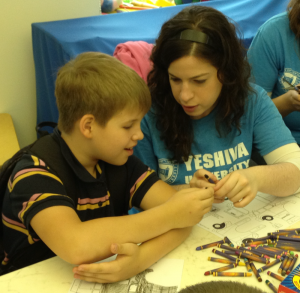 The goal of the trip was for the students “to gain a firsthand understanding of the welfare challenges and identity struggles facing the Jewish community following the collapse of the Soviet Union,” said Aliza Abrams, assistant director of the CJF’s Department of Service Learning and Experiential Education, who led the mission. “By engaging in service projects and cultivating relationships with members of the community, the students learned about Jewish life in Odessa and worked to internalize the messages of the people they were privileged to meet.”

“The mission was truly a life-changing experience,” said participant Ariella Agatstein, a senior at Stern College for Women.

A highlight of the trip for Agatstein was meeting an 87-year-old woman named Larissa who was sick, bedridden and living in a rundown one-room apartment. “She told us that her final wish was to visit Yerushalayim,” Agatstein said. “I was in awe by her response and it definitely caused much self reflection. I have the ability to visit Israel any time I want and I take it for granted. She was an inspiration to all of us and I will never forget her powerful words.” 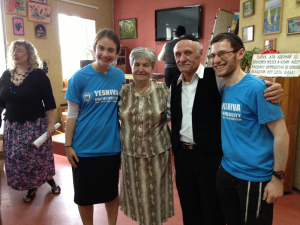 The group visited different Jewish community centers, synagogues, orphanages and various historical sites including Uman, home to the burial place of Rebbe Nachman of Breslev. But more important than those visits was “the opportunity to engage and develop relationships with the Jewish youth of Ukraine,” said Agatstein. “We observed their culture and learned the way that they practiced their Judaism.”

Rabbi Eli Belizon of Fair Lawn, NJ, an assistant Rabbi in the Mazer Yeshiva Program and dean of the YU-affiliated Fair Lawn Beis Midrash Program, accompanied the students on the trip, giving shiurim [lectures] to the group and answering halachic questions as they arose.

“It was an incredible experience and tremendously inspiring to meet so many people who are dedicating their lives to helping other Jews rebuild their Yiddishkeit [Jewishness],” he said. “It was a real trip for the neshama [soul], with nonstop chessed [acts of kindness] and learning Torah, and we were able to create real connections with the people we met.” 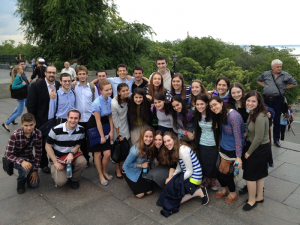 The trip was also a great opportunity “to take what we learn from the walls of the classroom and Beis Midrash and implement those same shiurim in a different place to apply them to the activities we were doing,” Belizon said. “For example, when we went to visit an orphanage, we learned about issues of conversion. It made what we were learning real and palpable.”

This was the third visit to Ukraine by YU students in recent years, allowing participants to “strengthen the relationship between the two communities and reminding us as well as the Jews of the Former Soviet Union that we are a part of the global Jewish community,” said Abrams. “We also had a chance to explore what Jewish tradition has to say about service and responsibility to the Jewish people and the world.”