As part of the Straus Scholars Program of the Zahava and Moshael Straus Center for Torah and Western Thought, Straus Scholars participate in weekly reading groups outside the classroom that cover the great texts of the West and Judaism. 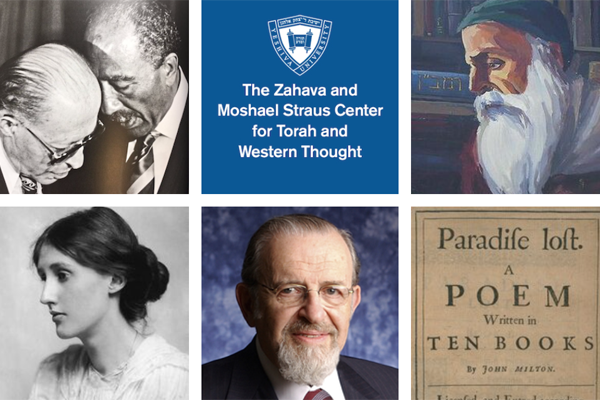 On the Beren Campus, Dr. Shaina Trapedo is teaching Essayists as Artists: Aesthetics and Ethics, which “reads ‘the best’ essays—including those by Mark Twain, George Orwell, Virginia Woolf, Rabbi Joseph Soloveitchik, Rabbi Norman Lamm and Rabbi Aharon Lichtenstein—and studies how an awareness of craft and the fullness of thought can be used to make meaning of our world.”

Rabbi Dr. Dov Lerner is focusing on Paradise Lost, “John Milton’s seventeenth-century seminal biblical epic, which depicts the emergence of humanity and its eviction from Eden, while engaging matters of theodicy and ethics.” Ms. Sarah Wapner is reading the writings of Menachem Begin, tracking his development from soldier to statesman in his written work.

“Our reading group traces the life of Menachem Begin through his evolution from Zionist activist in pre-war Europe to Israel’s sixth prime minister. Through an in-depth examination of the critical moments in his lifetime, our reading group considers the many roles Begin embodied in his lifetime, his enduring political ideologies and his unwavering commitment to Jewish political self-determination.”

“I really admire the nuances in thought that we uncover through our reading group discussions,” said Straus Scholar Ru Benhamou ’24S. “The texts we are reading illuminate Menachem Begin’s Zionism and his profound influence on Israel, then and now.”

On the Wilf Campus, Rabbi Dr. Meir Soloveichik is teaching Aggadic Man: A New Approach to Talmudic Tales, pushing students to combine lomdus [Talmudic analytical study] and literary theory while studying some of the most famous Talmudic aggadot [parables]. Dr. Neil Rogachevsky is having his students study The Federalist Papers and their impact on America to this day. Rabbi Itamar Rosensweig is reading the works of Ramban, both on halacha [Jewish law] and philosophy.

“The Federalist Papers are a window into the minds of Hamilton, Madison, and Jay on the U.S. Constitution,” said Natan Ehrenreich ’23YC, who is studying with Dr. Rogachevsky. “It is special to read the words of the framers, men who would occupy the halls of Congress, the presidency, and the chambers of the chief justice. Above all, my initial dive into the 85 papers has given me hope for the continued prosperity of American self-governance.”

“Rabbi Soloveichik’s understanding of Aggadah is revolutionary,” said Benjy Gottesman ’23YC. “The fealty to rabbinic tradition meshed with a proper understanding of historical context and Jewish ethos creates a new landscape of Talmudic thought that has been illuminating.”

To learn more about the Straus Scholars Program, including our fall 2022 application, click here.