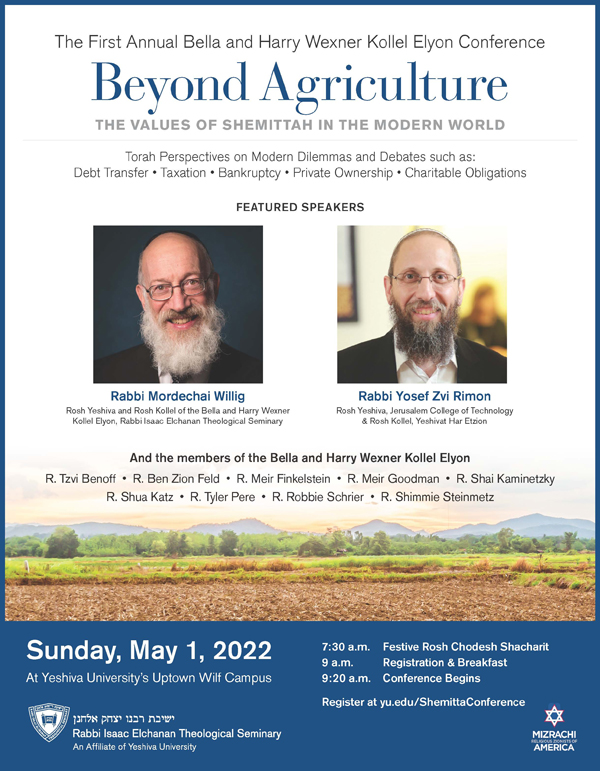 Titled “Beyond Agriculture: The Values of Shemittah in the Modern World,” this year’s Bella and Harry Wexner Kollel Elyon Confernce conference, was introduced by President Dr. Ari Berman and graced with remarks by Susan Wexner.

Active in the preparation of the conference were RIETS Rosh Yeshiva, Rabbi Daniel Feldman, Rabbi Neal Turk (Mashgiach of the Semikha [ordination] program), and Rabbi Ezra Schwartz, a RIETS Rosh Yeshiva and Associate Director of the Semikha Program who oversees RIETS’ many Kollelim. Rabbi Schwartz explained that the conference was organized because “part of the Bella and Harry Wexner Kollel Elyon’s ongoing effort is to educate the next generation of engaged and broad-reaching rabbis.” To do that, “this year’s cohort of Kollel Elyon fellows commenced a new course of study of task-based learning … analyzing the laws of shemitta, the sabbatical year, when land in Israel is to remain fallow and all debts are canceled.”

As he explained, the fellows wanted to do more than analyze the legal minutia of shemitta; “they wanted to probe the philosophical and sociological principles that underlie these laws.” Each fellow selected a general topic that was discussed in the course and analyzed that topic in greater depth. They investigated fundamental questions such as what can shemitta teach us about bankruptcy? What light can shemitta shed on the question of socialism vs. capitalism? Are there lessons that can be learned from the laws of shemitta about the ethics of receiving and giving charity?

“They did a wonderful job in presenting their findings to the conference participants,” he noted, “and showcased the important intersections of high-level Torah and issues of communal importance and philosophical significance.