It’s nine o’clock on a Wednesday night and the Yeshiva University women’s basketball team is practicing basketball drills in a midtown high school gym. Poised on the sideline, guard Stephanie Greenberg holds a basketball close to her chest, scanning the court for an open teammate.

Greenberg, a Stern College for Women sophomore, inbounds to Naomi Gofine, who curls around a defender and fires a pass to a cutting Rebecca Yoshor, who effortlessly lays it in the hoop. “I like that!” calls out Coach Nesta Felix. “When you do it right, basketball is like beautiful music. That was pretty.”

Felix, first-year head coach of the Maccabees, has worked rigorously, alongside Assistant Coach Garianne Brown, to mold the 2012-13 squad into one of the most hard working, tightly knit and cohesive teams to set foot on court for YU.

A native of St. Lucia, Felix was a two-sport Division I athlete, playing basketball and volleyball for Iona College. Her coaching career began right out of college in 2001, with Felix serving as an assistant coach for seven seasons at Monroe College, where she helped lead the team to four regional championships. In Fall 2012, Felix brought her discipline, determination and passion to Stern College—traits she has found in the Maccabees, as well. “One of the things I love about coaching here is the focus and work ethic of my ladies,” she said. “I’m driving them like they’ve never been driven before, but they are so committed because of who they are.”

There have been some adjustments for both Felix and the team. YU’s dual curriculum and the Jewish calendar have challenged Felix’s pro-style coaching techniques in new ways. And that was before Sandy struck.

“Sandy was tough on us,” Felix said. “Everything closed down in the city and we lost a lot of valuable weeks of practice.” But neither holiday breaks nor superstorms would stump the team. While they waited to get their practice facility back, Felix and Brown visited student dormitories to train with players in the lounges—working out and lifting weights. “There’s an intensity we’re looking for,” said Felix. “We didn’t want them to stop.” 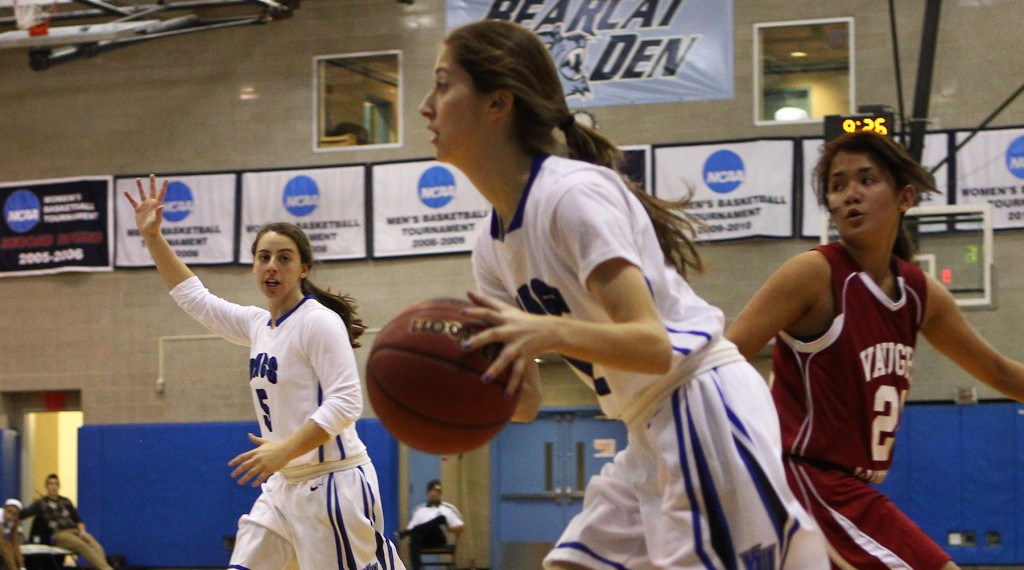 Over the holidays, students checked in with Felix online to let her know when they were practicing—the team has a goal of 10,000 shots a week, each. And Felix has also upped practices from three times a week to five. The demanding schedule and hard work is not only honing the individual talents of each team member but harnessing the strengths of all players to create a fluid, harmonious unit—on and off the court.

“I yearned for that feeling of being part of something bigger,” said Stephanie Greenberg of her decision to join the team this year. “We epitomize that tight knit team. We spend hours together every night during practices and games, yet we still manage to find ourselves hanging out at other times in places like 16 Handles, our second home, or eating dinner at a teammate’s apartment.”

One of the team’s leading scorers, Greenberg, of Cedarhurst, New York, is also known for her vibrant spirit. “She’s always excited and has this bright personality,” said Felix. “If she’s not there, the energy is missing.”

Another high-energy player is fellow sophomore guard Arielle Greenberg (no relation to Stephanie), a pre-med major Felix compares to her little sister. “One day in practice I was singing the chorus of a hip hop song while they were drilling, and Arielle started doing the verse,” Felix said. “We cracked up so hard. The cultural exchange is incredible.”

Juggling a busy athletic schedule with a course load many students would find intimidating on its own has its rough moments, but Arielle, a native of Toronto, Ontario, is committed to giving both her best. “There’s nothing I could say to even begin to give my players credit for the workload they’re balancing,” said Felix.

“I tell everyone Rebecca’s our secret weapon because when you look at her, she seems so fragile,” said Felix. “She doesn’t look as tough as she is.” A junior from Houston, Texas, Yoshor ranks among the leaders in the country in double-doubles, having collected 10-plus points and rebounds in nearly all of her career contests. Last year, in her first season of collegiate competition, Yoshor was selected to the Hudson Valley Women’s Athletic Conference All-Conference team and her 14.6 rebounds per game placed her second in the entire NCAA, across all divisions.

Yoshor’s dominance has continued into this season, leading the team in scoring, rebounding and blocked shots. That success has followed her off the court and into the classroom. Yoshor, who is pursuing a major in English literature and a minor in psychology, carries a 3.97 grade point average and was recently named to the Capital One Academic All District Team, which recognizes the nation’s top student-athletes for their combined athletic and academic performances.

“My experience this season has taught me the importance of maintaining a strong belief in your own abilities, no matter what challenges are presented to you, because you need confidence to achieve success,” said Yoshor.

Felix continuously works to instill that confidence in her team. “I’ll talk smack to them,” said Felix. “They’re so nice! We’ve had a lot of drills so they know it’s okay to get in each other’s faces.” But though she’s training the Macs to be tough, Felix also emphasizes deep caring and commitment to each other’s wellbeing.

“Coach even came to school to check on us during finals week because she truly cares about us off the court as much as on,” said Stephanie Greenberg.

Ultimately, the Macs are learning more than how to set up the perfect lay-up—they’re learning how to work together to succeed. “Each player brings a unique perspective, sense of humor and fun spirit,” said senior team captain Naomi Gofine. “There are so many different personalities, but I have enjoyed being a part of the Lady Macs’ transformation from a group of individuals to a strong team bound by friendship and camaraderie.”

Cheer on the Macs during their last home game of the season on February 11, when they will hold the first annual Lady Macs Madness. The night will feature a tailgate party and pre-game poster-making session. For more information, contact Shimra Barnett at shimra.barnett@mail.yu.edu.

Thanks again for the blog article.Really looking forward to read more. Want more.

Thank you ever so for you article.Much thanks again. Really Cool.

I really like and appreciate your blog.Really thank you! Keep writing.

Thanks so much for the post.Much thanks again. Fantastic.