On November 8, thousands of people in cities and countries across the globe will break out in choreographed dance and song in celebration of World Kindness Day. The flashmob will extend over continents and across oceans, spanning languages and cultures, but they’ll be united as they dance to a single anthem—a song written and performed by Yaakov Feldstein, a junior at Yeshiva University’s Sy Syms School of Business.

Called “More Light,” Feldstein’s song was chosen over dozens of other submissions to represent Dance for Kindness, an initiative organized by Life Vest Inside to promote kindness, positive interactions between people and global unity. Feldstein was shocked to learn his song had received more votes from listeners around the globe than any other song: “I didn’t write the song specifically for the contest,” he said. “I had just finished recording it and was about to release it as a single on iTunes and Spotify when I stumbled across the contest information and realized that this might be exactly what they were looking for.”

That’s because “More Light,” inspired by Feldstein’s experiences working with friends at Camp HASC, Yachad, Music Vs and Chai Lifeline, celebrates many of the same values Dance for Kindness seeks to share. “It’s a song about how everyone has their own individual or unique abilities and how we have to use these talents to make a positive impact on the world, whether that’s doing chesed [acts of kindness] or other ways people can use their skills for a good purpose,” said Feldstein. “It’s a motivational song to try to inspire people to do this.”

For Feldstein, that has meant honing and sharing his musical gifts with the world. “I’ve been playing music since I was seven, and writing my own songs since I was 14,” he said, including songs for organizations, such as HASC, NCSY and Kol Koreh, and performing at venues that run the gamut from the Bridgeview Yacht Club to soup kitchens to outdoor menorah lighting ceremonies with his high school band. His favorite instrument? “The cello. It has a beautiful string feel, but at a lower register than violin, it’s got a sweet, beautiful, powerful sound that can be heart-wrenching and heartwarming at the same time.” 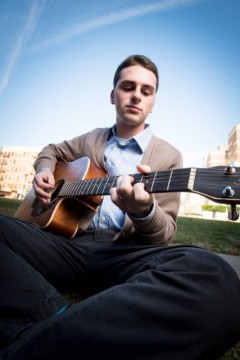 At YU, he is enriching his craft with voice lessons at the Philip and Sarah Belz School of Jewish Music, and enjoying the opportunities to collaborate with other musical students. He’s also enjoying the chance to deepen his connection to Judaism even as he prepares himself for a career in finance: “I firmly believe in the Torah Umadda outlook and I think it’s important that my Jewish studies are serious and important and primary, without compromising the secular education I need to be successful in the business world,” said Feldstein.

“There are so many positive influences around us in the batei midrash that make sure that neither the Torah nor the madda [worldly knowledge] gets compromised. It’s clear that YU is a serious place from both standpoints, and I think it’s unbelievable to have access to roshei yeshiva like Rav Twersky, Rav Schachter and Rav Sobolofsky, as well as mashgichim [spiritual advisers] like Rabbi Blass and Rabbi Bacon, who have been so helpful to me. I’m in Rav Hirsch’s shiur, and he has been a big influence on me.”

In the meantime, Feldstein has been working closely with Dance for Kindness in preparation for the big day, even performing “More Light” live at YouTube Studios during the Dance for Kindness Launch Party last week. A special choreography has been written for the song and taught to participants in the flash mob across the world. For Feldstein, knowing that his music will be used to inspire thousands of people to treat others well is an incredibly rewarding feeling. “I’m viewing it as one massive opportunity to make a huge Kiddush Hashem, because I’m a young religious guy with a kippa on my head who goes by ‘Yaakov’ and I get to be the driving force behind this—to do it all l’sham shamayim [for the sake of Heaven] and hopefully be able to make a positive impact with the abilities that God gave me,” said Feldstein. “If I do that, I’ll be a success.”

As for the future, fans of “More Light” should have plenty to look forward to: Feldstein is already working on other songs. “I’d love to be making music all day every day for the rest of my life,” he said. “And with Hashem’s help, I will continue to put my heart and soul into my music, whether just to connect myself or to inspire others.”