As public approval ratings for Congress and the Obama administration plummeted to record lows in the wake of the recent government shutdown, veteran investigative reporter Bob Woodward shared his theory about where it all went wrong at a lecture under the auspices of Yeshiva University’s Dr. Marcia Robbins-Wilf Scholar-in-Residence Program, held at the Center for Jewish History on November 13.

Titled “Washington’s Broken Politics,” the program focused on the origins and impacts of Washington’s dysfunctional politics, using Woodward’s unique experience covering numerous presidential administrations, including Obama’s, as a lens to reflect on the current political climate.

“What’s going on here is baffling,” Woodward told Professor Bryan Daves, clinical assistant professor of political science and director of the program, who served as the evening’s moderator. “It’s not in the country’s interest, not in Obama’s interest and not in the Republicans’ interest. So much of it has to do with who Obama is and how he thinks.”

Woodward offered much personal insight into Obama’s personality and leadership style throughout the discussion, drawing on extensive interviews he had conducted with the president over the last five years. “It’s been written that he has an arrogant side and you can argue that, but interestingly enough, there’s a humble side,” he said. “He realizes where he came from, how unlikely and improbable it is that he would become president, and there’s a kind of restraint. In an odd way, I’m not sure he understands the power [of the presidency].” 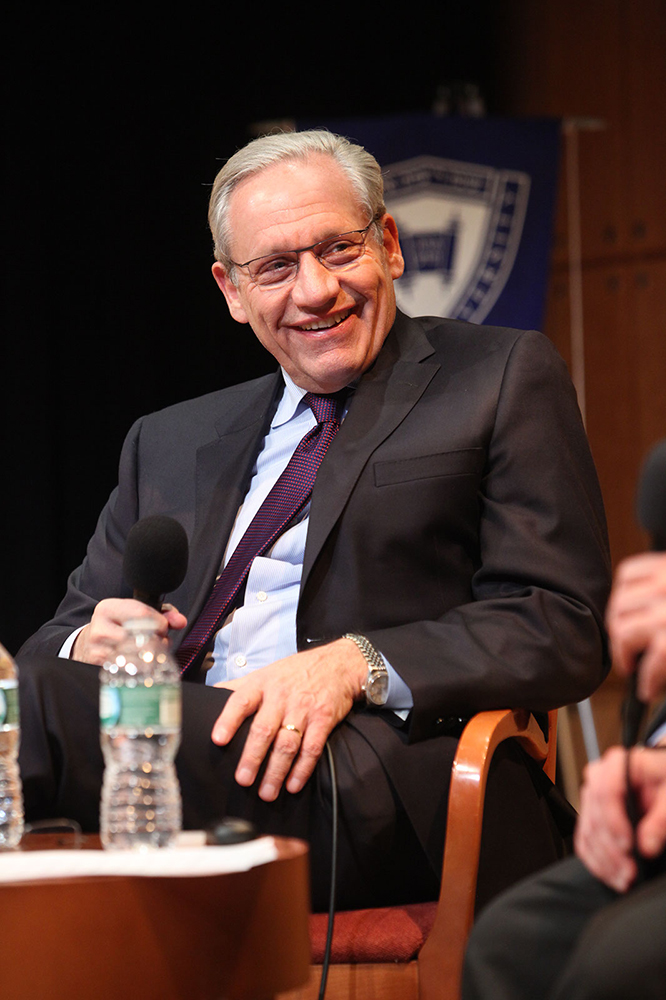 Woodward also spoke about the power of personal relationships, or lack thereof, in Washington today. “You have to roll up your sleeves and establish relationships,” he said, comparing challenging bipartisan discussions to the way compromises are worked out in marriages. Woodward cited the budget negotiations in 2011 as evidence of an emerging “winner-take-all” mentality in Congress. “First Obama got no tax increases, nothing on his side, then with the fiscal cliff negotiations, it was the opposite—all the tax cuts were expiring, so Obama got 600 billion in tax increases in the upper brackets, but the Republicans got nothing,” he said. “Anyone who’s been married knows that’s the worst kind of negotiation you can have.”

According to Woodward, the solution is within reach—if leadership in Washington, from Obama to Speaker of the House John Boehner, can learn from their mistakes and reinvest in relationship-building with one another. “Not a single Republican voted for Obamacare, and if you are even a passing student of history you know that’s lighting the fuse of partisanship,” he said. “But Republicans are reachable. All of these budget issues that were resolved when they shut down the government were resolved by Democrats and 85 Republicans in the House. The votes are there and there’s a way to do it.”

Woodward added, “The horror story is that in two to three months we’ll go back to negotiations over the debt ceiling and whether we should close the government, and why? Because at the beginning, when the Republicans took over the House, the President and Boehner didn’t find a way to harmonize their relationship.”

Emily Santana, a second-year law student at YU’s Benjamin N. Cardozo School of Law, found Woodward’s commentary on Obama’s character especially intriguing. “He knows so many people in the government, so you really felt like you were getting a behind-the-scenes look at what goes on in Washington,” she said. “His perspective on Obama’s unwillingness to play political games was interesting.”

“He has been involved in political writing for so many years that he truly has the vantage point of time and history,” said Anne Frankel, who remembered following Woodward’s reporting on Watergate.

The Dr. Marcia Robbins-Wilf Scholar-in-Residence Program at YU’s Stern College for Women brings top scholars, authors, artists and opinion makers to Stern College, offering students unique perspectives on the world. It was established by Dr. Robbins-Wilf, a founding member of the Stern College Board of Directors.