More than 1,100 Receive Free Genetic Screening at Largest Event of Its Kind Hosted by YU Students

A groundbreaking 1,162 participants were able to receive free and comprehensive genetic testing during three sessions organized by Yeshiva University’s Student Medical Ethics Society (MES), in partnership with JScreen, a university-based nonprofit program specializing in carrier screening for genetic diseases common in the Jewish population. The screening was one of the largest of its kind ever held and made free testing available to young people of many different ethnic backgrounds and walks of life within the Jewish community. 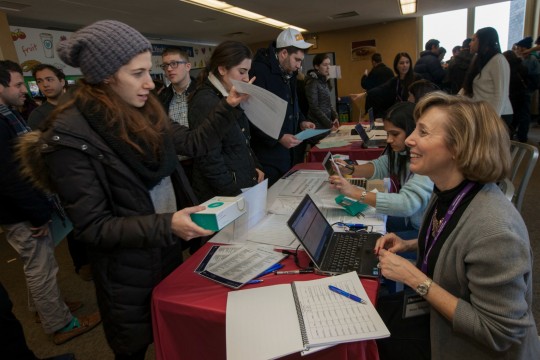 At the event, participants were screened for more than 100 possible disorders through an innovative technique that allows DNA samples to be collected through saliva, rather than blood, making the entire process quicker and less intimidating. They also had the opportunity to consult with a licensed genetic counselor. A generous subsidy from JScreen meant there were no out-of-pocket costs to anyone who attended the screening, ensuring that expense was not a barrier for anyone seeking testing.

“This project was completely a student-run initiative,” said Rebecca Garber, co-president of MES. “Genetic screening is something that people may not recognize the importance of until it’s too late, and we had the opportunity to reach our peers at a critical time before they have children and educate them about their own risks and options, which is one of our goals at the Medical Ethics Society. The impact that our screening had on the greater Jewish community is incalculable—the fact that we were able to make such an impact proves that anyone anywhere can make a difference. ”

“This is what YU is all about: students who are activists and through their passion, commitment to the ideals of Torah and knowledge of science have brought together more than 1,100 young people to help ensure a healthier  future and diminished pain and suffering in our community,” said Rabbi Kenneth Brander, vice president for university and community life at YU.

“Young Jewish couples are at risk for having children with devastating genetic diseases, but the majority of young Jewish men and women have not been screened,” said Karen Arnovitz Grinzaid, senior director of JScreen. “The Jewish Genetic Disease Consortium confirmed that the Yeshiva University event was the largest screening event since the community-wide Tay-Sachs screenings in the 1970s and 80s.”