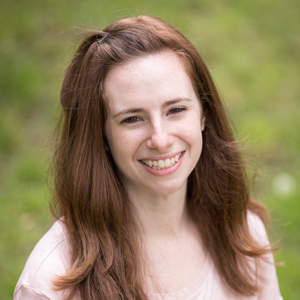 Depending on how one looks at the experience of flying into and out of LaGuardia Airport (LGA) in Queens, New York (former vice president Joe Biden did compare it to an airport “in some third world country”), Naomi Levin Katlowitz ’12S has either the best or the worst job in the world.

She is working with HOK on the redesign of LGA Terminal B. HOK (formerly Hellmuth, Obata + Kassabaum) is an American worldwide design, architecture, engineering and urban planning firm. “I joined the company as the redesign of LGA was just starting, so I was lucky enough to be placed in the aviation and transportation department. These past three-and-a-half years working on this state-of-the-art passenger terminal has been definitely a once-in-a-lifetime opportunity.”

More on the redesign in a moment. A more immediately interesting question is how a YU graduate came to work at the largest U.S.-based architecture-engineering firm and the fourth-largest interior design firm, an unusual career path for a Stern College alumna.

Growing up in Teaneck, New Jersey, “I always knew that I wanted to be an architect from a very young age.” Her mother encouraged this desire by “making sure I had people in my life who could teach me.” She set her up with weekend art classes and connected her to an architect from their shul “who sat me down and gave me my first lesson in holistic design approach, understanding the importance of not only designing a beautiful interior but also making sure everything aligns.”

But though she loved architecture and knew she would pursue a career in the field, she chose not to pursue an architecture undergraduate degree because she had other important personal goals she wanted to achieve, such as “finding an environment where I felt comfortable looking deeper and finding meaning in the Jewish way of life.” Coming to YU allowed her to “select a program that would give me a fully rounded education that would serve me best in the professional and personal world.”

She chose a dual course of study with a physics major and an art minor because this combination satisfied in her a love of both rigorous thinking and artistic imagination. “Bringing these together,” she said, “allowed me to have two vastly different college experiences at YU.” In the physics department, she found a faculty committed to fostering a close community of questioning and exploring. “I was so lucky to have found two wonderful mentors, Dr. Anatoly Frankel (who is now at Stony Brook University) and Dr. Morton Lowengrub; both knew that I was ultimately going to pursue an architectural degree, and both took the time to talk about physics, math and life in general.”

On the other hand, the art department “is huge and diverse with students of incredible talent. I was able to put together a portfolio to apply to architecture schools with help from the art department staff. I loved taking classes at the Fashion Institute of Technology, which allowed me to round out my portfolio and art skills but still live with friends and a kosher caf.”

Some semesters were more heavily focused on the sciences, others more on art courses, “but the constant themes were Jewish community, pursuit of higher learning, and trying to gain as much diverse knowledge before focusing on architecture post-college.”

In addition to the top-notch academics in her dual program, she also had the gift of committed collegiality from her teachers and fellow students. “Stern College boasts high educational learning but also small classes, so I was able to get one-on-one time with academics at the top of their fields that you can’t get elsewhere. Everyone knew my interests and where I intended to go and tried to help me as best they could in every arena.”

She especially treasured the help she received from Dr. Lowengrub. “Not only did he take the time to discuss course material after class, but I always made sure to stop by his office at least once a semester to catch him up on my academic pursuits. He always made the time to chat and give advice. I had originally planned on majoring in the physical sciences, but he convinced me early on that I should major in physics and would love it despite my single-minded focus on architecture. He was right!”

The assistance given to her by the Career Development Center was also helpful. “The Center connected me with two wonderful architects in the New York area. Both were tremendous sources of information for the graduate school application processes and were invaluable in my decision about which graduate school to attend. To this day, I have maintained close relationships with both women, even working as a summer intern with one, and therefore I highly appreciate the value of having a mentor at every step of the process going from inbound college student to practicing architect.”

The power of these connections is something that has stayed with her as she has moved forward in her career. “At every point since I left YU—in graduate school, summer internships and my first job—I have made sure to find and maintain relationships with individuals who can continue to guide and facilitate my growth as a professional as well as find others who I can help so that I can pay it forward.” She has made sure the Career Center has her on their list of architectural alumni available for mentoring, and she has helped many aspiring students over the past six years.

She attended Pratt Institute for her graduate work “because it is known for its more esoteric and conceptual design approach than others. I made this decision because I knew that my thinking style is very direct and absolute (one of the reasons I love physics), and I wanted the opportunity to expand my mind.” Pratt also offered Katlowitz the chance to work with students who were not pursuing architectural degrees, “so I knew that I would be able to learn from those with different backgrounds than I while at the same time bringing something of my own to the mix.”

Working at LGA has required her to bring to bear her eclectic background in math, science and art. “I work with my team to design a phased construction approach. This allows the terminal to be built on the constrained site with minimal impact to existing conditions. Now that the first 11 gates have been opened on the eastern concourse, I feel even more pride to have contributed to a project of this caliber. Watching the first passengers walk through the newly constructed and opened concourse has been an immensely satisfying experience.”

Along the way, she has learned some valuable lessons about her chosen vocation. “Something that surprised me was how much total and complete communication is required to design, document and build any project, especially one of this size and quality. My first site visit during construction left me in awe of its magnitude and scale. There are so many different people involved at all levels, and everyone contributes a piece to the final puzzle.”

Another challenge concerns the attention to detail, “taking me back to what my first mentor tried to relate to me. There is nothing too small to ignore; every single line drawn on the construction documents means something, and every single modification results in a large trickle-down effect. Thinking three-dimensionally and holistically is incredibly important.”

Katlowitz admits that the airport redesign is the perfect project for her, one that draws upon all her strengths. “The challenge has been deriving a beautiful and active space from the practical and number-crunching aspects of flight schedules. This lets me merge my love of numbers and calculations with design. For example, the check-in area is planned out based on assumptions calculated from airline flight schedules, which also has to take into account the inevitable delays. All these data then need to translate into a practical and comfortable waiting area. It’s a numbers game that I love: accommodating the most passengers without overdesigning.”

Eventually, the airport redesign will be finished, but Katlowitz has no intention of moving away from architecture. “In the past year, I completed the seven exams and experience required for licensure in New York.” Her love of the practice does not only come from “combining my love of precise formulas and calculations with general concepts of design” but also from a deep belief that “the built environment is intimately tied to the quality of human life.”

A building is defined by more than just its physical elements; “it’s also defined how it is used by its occupants.” As she points out, one of the most important stages in design and construction is the last step of feedback and optimization because how the occupants use the building counts towards the success of the design. “For example, one of the most exciting aspects of the new terminal is it’s intuitive wayfinding and short curb-to-gate walking distances to maximize efficient passenger movement through the terminal. The architecture should serve its occupants, not the other way around.”

“I went to YU because I believed that from YU you can go anywhere, and I think my career is the best proof of that belief.” When not redesigning one of the busiest airports in the world, she builds a lovely family life in Riverdale, New York with Vigi, her husband, and their two-year-old daughter, Ella. Together, they like making and eating pasta while Ella points to all the planes as they fly overhead.