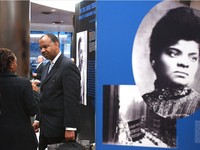 May 4, 2004 — To commemorate the 50th anniversary of the landmark U.S. Supreme Court case Brown v. Board of Education, which ended segregation in the nation’s schools, Benjamin N. Cardozo School of Law of Yeshiva University will sponsor a series of events. They will be held at the Law School, 55 Fifth Avenue at 12th Street, and are open to the public. For more information, call 212-790-0310.

“Marching Toward Justice,” an exhibition on the history of the 14th Amendment, will be in the Law School’s lobby from April 8 through May 2, 2004. It is open from Sunday through Thursday 9:00AM-6:00PM and Friday 9:00AM-2:00PM. The exhibition features photographs, illustrations, and text illuminating the African-American experience from 1619, when the first African captives arrived in colonial America, through 1957, the year nine African-American students were admitted to Central High School in Little Rock, Arkansas. The 14th Amendment, added to the Constitution in the wake of the Civil War, granted equal protection to all Americans regardless of race.

The exhibition is on loan from the Damon J. Keith Law Collection of African-American Legal History at Wayne State University and was most recently at the Thurgood Marshall Courthouse at 40 Foley Square. Cardozo and the United States Court, Second Circuit collaborated to bring the exhibition to New York.

Honorable Jack Weinstein of the U.S. District Court for the Eastern District of New York and Honorable Constance Baker Motley of the U.S. Court for the Southern District of New York are among the panelists scheduled to discuss the impact of Brown v. Board of Education on April 14 at 5:00PM. They were both on the briefs in all the cases that were part of Brown. They will be joined by Honorable Roger L. Gregory of the U.S. Court of Appeals for the Fourth Circuit and others.

Jack Balkin, Knight Professor of Constitutional Law and the First Amendment and the director of The Information Society Project at Yale Law School, will discuss three pivotal events in the history of civil rights in a lecture entitled “Plessy, Brown and Grutter: A Play in Three Acts” on April 27 at 6:00PM.

Benjamin N. Cardozo School of Law is well known for its prolific and high-profile faculty as well as top-ranked programs in intellectual property, corporate and criminal law, entertainment and communications law, legal theory, and Jewish law. The Law School’s clinical program has been cited as one of the best in the country. Cardozo has graduated nearly 8,000 students since its founding in 1976.