Thanks to the Cardozo Communications Department 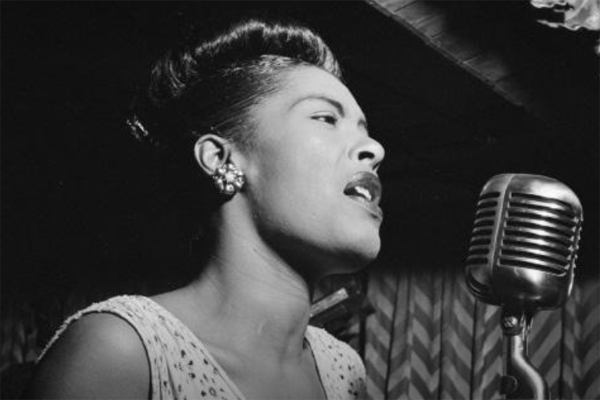 Any time we walk through the 10th and 11th Floors of 55 Fifth Avenue, we walk through musical history. The legendary jazz great, Billie Holiday, created her first recordings in the home of the Benjamin N. Cardozo School of Law, formerly the location of Columbia Records (now owned by Sony).

On Monday, Feb. 22, 2021, Cardozo alums Julie Swidler, EVP of Business Affairs and General Counsel (Global) at Sony Music Entertainment, and Professor Barbara Kolsun were joined by Professor Kyron Huigens and a swath of Billie Holiday experts to discuss the history of the Columbia and Sony recording studios in the 1930s, the discovery of Billie Holiday’s recordings at 55 Fifth Avenue and, most importantly, the life, cultural contributions, and enduring legacy of an extraordinary talent. The event was co-sponsored by The FAME Center, the Office of Alumni Affairs, the Office of Career Services, Cardozo Committee for Diversity and Inclusion, Office of Student Services and Filmmakers Legal Clinic.

“I happened to come across some liner notes in Billie Holiday Collection,” recalled Prof. Kyron Huigens. “The notes were written by John Hammond. The liner notes were short, but they had a passage that stopped me in my tracks when I read it.”

The notes revealed that Hammond discovered Billie Holiday at Monette Moore’s speakeasy on West 133rd Street and was able to convince Benny Goodman to use her in a recording at Columbia Records, then located at 55 Fifth Avenue (now Cardozo School of Law). Those first songs, “Riffin’ the Scotch” and “Your Mother’s Son-in-Law” lead to her recording of “Strange Fruit,” a protest of the lynching of Black Americans that has been called the beginning of the civil rights movement.

“We have to uplift Billie’s extraordinary talent,” said City Councilwoman Carlina Rivera, as she spoke about Holiday and honored her place in Black history and American history.

James Erskine, director and screenwriter of the biopic, Billie, spoke about the making of the film and his partnership with Michele Smith, who was also in attendance, and works with The Estate of Billie Holiday.

Prof. Ingrid Mattson focused on the history of the building we now know as Cardozo School of Law. Before the current building stood, the old Lenox mansion was on the site, built by wealthy philanthropist James Lenox. The Institute of Musical Art (now Juilliard) used the space from 1905–1910.

Mattson’s research found that when the music school moved uptown, the building was sold to real estate developer Henry Corn, who demolished it and built the building that houses Cardozo School of Law today. “Construction ran around $1.5 million dollars. The building was home to a number of companies in the 1920s including a few insurance companies, a furniture store, a restaurant on the ground floor, a number of publishing houses, and the Literary Guild, which celebrated a raging 300-person party with over five hours of dancing and a cake comprised of ten different varieties of pastry according to an article from March 11, 1929, in the Standard Union. “It was clearly a vibrant commercial space,” she said.

According to a Feb. 14, 1931, article from The New York Tribune, Columbia Phonograph Company leased two floors for approximately $450,000 for 16 years. “Getting back to recording,” Mattson said, “among those who recorded here, I found Gene Autry and Jimmy Long in October 1931 (on Perfect Records), Fletcher Henderson and his band in December 1932, Duke Ellington and his Orchestra in February 1933, Benny Goodman and his Orchestra with Billie Holiday in November and December 1933, and The New York Age reported in its Talk of the Town section September 29, 1934, this brief note: ‘Billie Holiday is making records for Columbia.’”