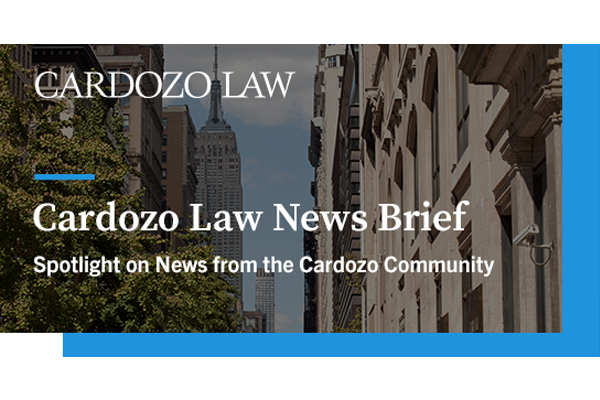 Jonathan (Jon) Lenzner ’04, a member of Cardozo’s Board of Overseers, was named acting U.S. Attorney for the District of Maryland.
Read More

“Forced arbitration is nothing more than a ‘get out of jail free’ card for companies that have enough market power to [force individuals] to sign or click ‘agree’ to their standard form contracts.”

“If the offense happens when the official is sitting in government…there is no constitutional obstacle to proceeding this way,” says Shaw. Shaw also joined WBUR’s On Point to discuss the matter. Day Two breakdown on ABC News. Day Three breakdown on FiveThirtyEight podcast and ABC News. Watch Good Morning America

“Over the years the Defense Production Act has been amended repeatedly…to address concerns of domestic preparedness,” says Pearlstein.
Listen Here

“It’s costing a lot of money this year. For 2021, they’re going to continue to give the credit. But a future governor, or even this governor, under fiscal stress, could reasonably say, ‘I’ve got to go back to the pre-2019 policy,’” Zelinsky says.
Read More

“I am deeply honored by the faith my colleagues have shown in me,” says Yankah. “I cannot think of more pressing work today than to secure faith in our elections, ensure elected officials are responsive to a broader electorate and inspire more citizens to know they can run for office.”
Read More

Billie Holiday’s Legacy Walks the Halls of 55 Fifth Avenue
Monday, February 22 at 6:30 p.m.
Co-sponsored by The FAME Center, Cardozo Committee for Diversity and Inclusion the Offices of Alumni Affairs, Career Services, and Student Services, and the Filmmakers Legal Clinic