Integrity, generosity, grit and joy were the guiding themes of Dean Melanie Leslie’s welcome to Cardozo Law School’s Class of 2022 for their first day of orientation. 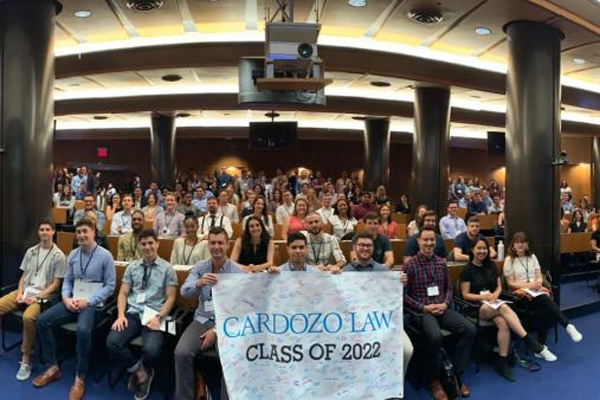 Dean of Admissions David Martinidez kicked off the day in the newly renovated Jacob Burns Moot Court Room, highlighting the accomplishments and diversity of the 313 students in the incoming Fall and May-entering J.D. class.

“I want you to remember that each of you, in your own way, has already achieved much success in your life,” Martinidez noted. “We are confident with a lot of hard work and dedication, you can thrive at Cardozo.”

The class of 2022’s academic credentials make it one of the strongest classes in Cardozo’s history. The incoming class has a median LSAT of 162 (which is the 85th percentile and is a one-point increase over last year) and a median GPA of 3.6 (an increase of .08 over last year).

The incoming students hail from 31 states and 17 countries, including China, South Africa and Argentina. Their educational background varies as well, from a PhD in Linguistics to a Master’s in Civil and Mechanical Engineering. Their hobbies and interests range from Taekwondo to table tennis. Martinidez asked the audience who had traveled to the most countries. The number to beat was 27. He also asked for a round of applause for the two members of the class who served in the military.

Martinidez stressed that regardless of the students’ unique paths in getting to Cardozo, they were chosen because of his confidence in their abilities to become the kind of lawyers who are leaders in the field they choose to pursue.

Dean Melanie Leslie ’91C took the podium next. As an alumna herself, she shared her experience of sitting in the same place as the incoming class. She marked the excitement of the day but reminded students of the responsibility that came with being a law student and joining the legal field.

Dean Leslie urged students to forget about the negative stereotypes they’ve heard about cut-throat competition in law school and instead take advantage of the close-knit Cardozo community.

“We are in this together. You are going to be Cardozo graduates, and this is going to be part of your network. And you gotta cheer each other on! One person’s success is everybody’s success,” she said. “You all get better when you help one another out.” 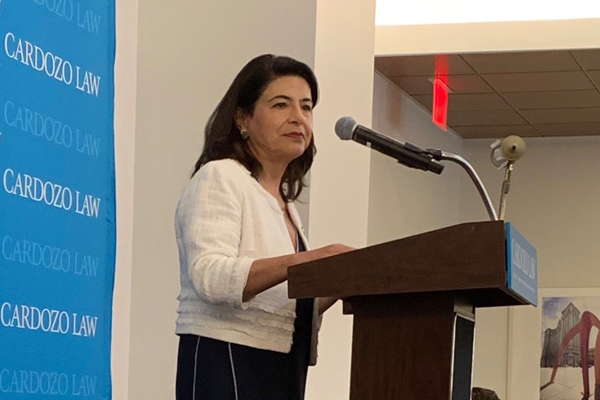 “I stand on the shoulders of a lot of women who paved the way for me to run,” Sen. Kaplan said. “As different as we think we may be, we have more similarities.”

After lunch, both JD and LL.M. students, many of whom had their orientation on August 13, headed to Chelsea Piers for Cardozo’s boat cruise down the Hudson River. For many, it was the first time seeing the sights of New York City up close as they shared in the excitement of a new beginning as they prepare to start on their legal journey with their first classes in Elements of Law.