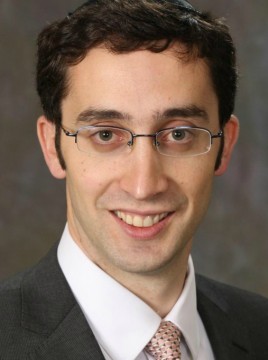 As the newest CEO of Genie Retail Energy, Inc.—which includes IDT Energy, one of the largest independent suppliers of electricity and natural gas to those who live in the Eastern United States—Michael Stein ’07YC has no small job before him. But, he said, he’s up for the task, and partially because of the education and inspiration he received while studying at Yeshiva University.

Growing up in Teaneck, New Jersey, Stein attended YU because he wanted to continue his Jewish education at the highest level possible, especially in an environment where he could proudly wave the Zionist flag. “In many ways, YU is the only place a fervently pro-Israel student can feel unabashed pride for how Israel defends itself against its enemies,” he said.

Stein majored in Psychology and minored in Jewish Studies, where he met Dr. David Berger, the Ruth and I. Lewis Gordon Professor of Jewish History and Dean of the Bernard Revel Graduate School of Jewish Studies, who quickly became a cherished role model. “Dr. Berger’s passion, humility and sincerity stand out beyond the information he taught me,” explained Stein. “I will be forever grateful for all the classes and lessons he taught me.”

Stein also enjoyed the close bonds with friends he formed at YU and the experiences they shared playing baseball in Tenzer Gardens, eating schwarma at Golan Heights and shopping at the annual Seforim Sale. “YU’s student body is truly unique,” said Stein, “and it could be that there isn’t a place in the world that is more densely populated with personal ambition than YU’s few blocks on Amsterdam Ave. At age 18, to choose a college that will be twice as much work as any other university—that’s special! I have so much admiration for my former classmates and current students.”

After graduating YU, Stein earned rabbinical ordination at RIETS and received a Master’s from the Bernard Revel Graduate School of Jewish Studies. He served as an intern and then Assistant Rabbi at the Riverdale Jewish Center. While he loved serving the Riverdale Jewish community—and, in fact, still lives there today—he simply felt the rabbinate was not the right place for him. Realizing that fact and coming to terms with the decision to change professions were major turning points for Stein, who gives a great deal of credit to his support network during that time. “I had support from my wife, family and friends,” he said. “Not only did they reassure me that I was not ‘quitting,’ but they also made me feel like my potential in any professional capacity was limitless.”

He joined IDT Telecom as the Senior Vice President of Business Development, where he worked on financial products for under-banked customers. After successfully launching the products, he moved over to an IDT affiliate, Genie Energy, as Senior Vice President of Operations and then Executive Vice President of Operations. Just a few weeks ago, he was named CEO of Genie’s domestic energy unit, which supplies electricity and natural gas to customers in six territories. “The company is both ideologically and strategically extraordinary as it continues to drill for oil in the Golan Heights under the guidance of some of the best scientists in the world,” said Stein. “We’re excited about its prospects, and the business has so much potential because of my phenomenal colleagues.”

As CEO, Stein is tasked primarily with improving and growing the business, a major role that Stein admits is more than just a little daunting.

“Critical decisions come up almost daily, and there are no Google maps or owner’s manual for how to run a successful company,” he explained. “I almost never know whether or not a decision was right or wrong until it’s already too late to change it. In that sense, being the CEO has made me more religious in certain ways. Running the company requires strong faith in G-d and a great deal of trust in others. I’m thankful to all of my business mentors, especially my father-in-law, Howard Jonas, for setting such a wonderful example of how to acquire both faith and trust in the workplace.”

Stein keeps in touch with YU and will be speaking, along with his father-in-law and brothers-in-law (all of whom work at IDT), at YU’s Sy Syms School of Business this coming semester. The topic at hand? Family business management, of course.

If asked, Stein has already accumulated an arsenal of valuable professional advice to dispense to students, and chief among these tips is not to hide religion in the workplace. “YU teaches us that religion and participation in the secular world do not have to be at odds,” said Stein, “and we’re blessed to live in a country where that is not just a slogan but a reality.” Other tips from Stein include putting one’s family ahead of one’s career; take initiative and go above and beyond what is asked and expected of you; never say or think “we can’t,” for where there’s a will, there’s a way; and always look to contribute your own unique talents to benefit the entire company.

Stein lives in Riverdale with his wife, Liora Jonas ’11S, and their three children Anaelle, 3, Eliav, 1, and Itiel, one month. Said Stein: “My kids make every day better than the day before. Three children under the age of 4 is a handful, but my wife is a superwoman and CEO of our home. She works much harder than I do to take care of our family; and she makes it look easy.”