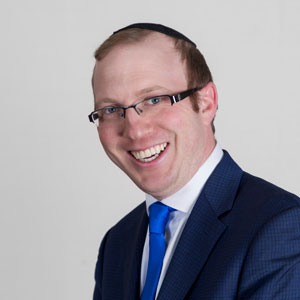 As director of operations at the Hebrew Free Burial Association (HFBA) and a licensed funeral director, Andrew Parver ’06YC feels that he is continuing the sacred work started 130 years ago when nine men met to form Chebra Agudas Achim Chesed Shel Emeth (The Society of the Brotherhood of True Charity) to care for the impoverished, marginalized Jews living in Manhattan’s Lower East Side.

“I understand the significance of what we are providing for our clients, who have nobody else to help them,” said Parver. “Judaism places so much emphasis on proper burials, and it’s gratifying to be able to help families navigate everything that needs to be done.”

The work he does today was not on his radar when arrived at Yeshiva College in 2003. There, he took the customary dual curriculum, focusing on Judaic studies and political science. The teachers he admired included Rabbi Mordechai Willig, Rabbi Dr. Sol Roth Chair in Talmud and Contemporary Halakhah and, according to Parver, still his rebbe today; Rabbi Hayyim Angel, instructor of Bible; and Dr. Gillian Steinberg, director of the writing programs and coordinator of the first-year seminars, who retired in 2015. “The most important thing that Dr. Steinberg taught me was not so much how to write as how not to write, lessons that I still use to this day.”

All along he had planned to become a lawyer. “But one Saturday night after Shabbos, I had an epiphany, a moment of clarity, that I didn’t want to be a lawyer—I didn’t know what I was going to do, but I knew I wasn’t going to do that.”

In the summer of 2004, to build up his résumé, he looked for a job, and through family and friends he found an internship at HFBA. “I did the usual intern things, like go to the post office to deliver the mail, then open mail that I picked up while I was there.” But as time went on, “as I kept proving my value to them, they kept giving me more responsibility, and I took on the responsibility because I knew the work we were doing was important and making a difference in peoples’ lives.”

Parver also went back to school, earning a Master’s in Public Administration from Fairleigh Dickinson University in Teaneck, New Jersey, and an associate degree at American Academy McAllister Institute, which prepared him to be a licensed funeral director.

Fourteen years after that summer internship, he still loves the work he’s doing and the mission of HFBA. One of his many tasks as director of operations is informing service and medical agencies at all governmental levels about HFBA’s services in order to build a coordinated approach to handling end-of-life issues when they involve members of the Jewish community. “Part of my job is to build contacts with city and social service agencies so that HFBA is notified about Jewish decedents and can make arrangements so that every Jew receives a prompt, dignified Jewish funeral and burial.”

Part of his work also involves teaching the Jewish community about how to prepare for their own deaths as well as the deaths of friends and family. “When people die, things get so complicated, even under the best of circumstances,” Parver said, “and people’s reluctance to plan for them while they’re alive makes it even more complicated. I understand how uncomfortable this can be for people. But I joke that looking at our bank accounts can also make us uncomfortable, but we have to look at them. The same applies to planning how our lives will end: every now and then we need to look at the issue, make sure we have a plan in place and make sure our loved ones know what that plan is.”

He helps people, especially isolated individuals who may not have a social network to support them, to preplan their final needs. This includes having their Social Security number available in their end of life paperwork, which is needed to file a death certificate, a prerequisite to arranging a funeral, and designating someone to authorize the burial. “I have an important obligation to advocate for my clients and others within the Jewish world that they have a better understanding of the role of funeral director. We have to be integrated as a team, from the medical staff providing care to the rabbi, the funeral director, and the funeral home because no one knows the full picture and together we can put the puzzle together.”

In addition to funeral preparations, the HFBA also offers yahrzeit reminders, kaddish services, educational programs, and genealogical research. It also maintains two cemeteries on Staten Island. Silver Lake Cemetery, the first cemetery established by HFBA, was purchased in 1892 with a $1,500 loan from HFBA member Max Silver. Over the next 17 years, thousands of Jews from the Lower East Side were buried here.

With Silver Lake filled by 1909, HFBA purchased its second cemetery in Staten Island, Mount Richmond, which is still used today by HFBA as its primary burial space.

“I see HFBA as providing a very important service to the community, and I feel a sacred obligation to do this, whether it’s in a professional or personal way,” said Parver. “I get phone calls all the time from people just asking for my advice – they don’t need my services, they just need answers to their questions. And I will always do my best to answer them because I don’t want anyone to ever make a choice that they regret later on, and I can guide people, to best of my ability, to the correct choice.”