On Thursday, Dec. 5, 2019, at the Roosevelt House of the City University of New York, Yeshiva University’s Zahava and Moshael Straus Center for Torah and Western Thought and Koren Publishers Jerusalem cosponsored an event celebrating the release of Rohr Family Edition of the Koren Mikraot HaDorot launched with the Zahava and Moshael Straus Edition of Parashat [the Torah portion of] Shemot [Exodus]. The Mikraot HaDorot series collects 2,000 years of biblical interpretation, ranging from Philo to the Talmudic sages, medieval commentators including Rashi and Nahmanides to modern thinkers such as Rabbi Joseph B. Soloveitchik, the Lubavitcher Rebbe, Rabbi Aharon Kotler and Nechama Leibowitz. 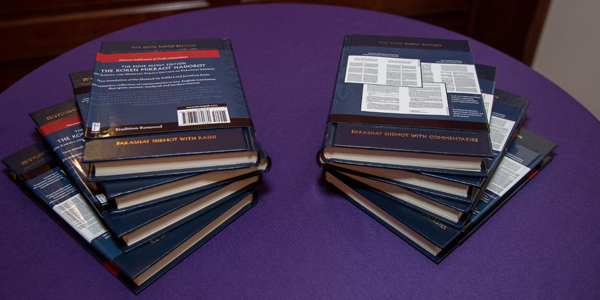 The evening began with opening remarks from Dr. Chaya Sima Koenigsberg (Stern College for Women) and Rabbi Dov Lerner (Yeshiva College), Straus Center Resident Scholars who mentor Straus Center students and collaborate with faculty on teaching courses and organizing programs that bridge Torah and the great works of the West.

The keynote lecture was delivered by Rabbi Dr. Meir Soloveichik, Straus Center director, who spoke about “Rashi, Roosevelt, and the Four Freedoms: A Shiur on Shemot in FDR’s Home.” He contrasted the religious and moral vision of the book of Exodus with President Franklin Roosevelt’s 1941 State of the Union Address on the “Four Freedoms”: freedom of speech, freedom of worship, freedom from want and freedom from fear. 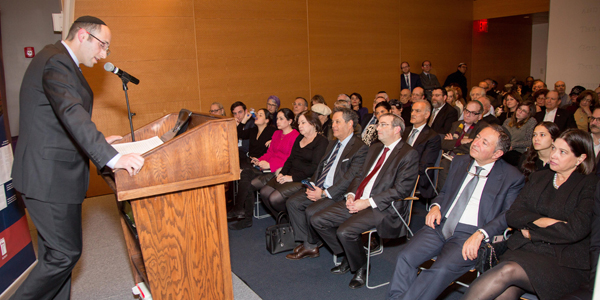 Koren Publishers and the Straus Center will offer another book launch on January 8, 2020, at Congregation Shearith Israel, celebrating the Susan and Roger Hertog Book of Exodus in the new Koren Tanakh of the Land of Israel series. That event will feature a lecture by Rabbi Dr. Soloveichik titled “From Mitzrayim [Egypt] to Manhattan: What the Egyptian Exhibit at the Metropolitan Museum of Art Teaches Us about the Exodus.” For more information, email events@korenpub.com