This commencement season, Yeshiva University celebrated the graduation of more than 1,700 students in its undergraduate colleges and graduate schools in the fields of law, medicine, social work, education, Jewish studies and psychology.

On May 9, the Azrieli Graduate School of Jewish Education and Administration conferred master’s degrees on 33 new graduates and four doctoral degrees in a ceremony in Weissberg Commons on the Wilf Campus. Dr. Lisa Miller keynoted the commencement exercises, sharing her research which documents spirituality as an essential life resource for health and wellbeing. “Jewish education has for centuries recognized the importance of inspiring children’s souls,” she said, stressing the role that educators and families play in nurturing every child’s innate spiritual gifts. Associate Dean Rabbi Dr. Moshe Sokolow compared the work awaiting Azrieli graduates to a verse from that week’s parsha, in which the priests are instructed “to light a perpetual flame,” noting that it is the task of educators to continually inspire and energize their students each day.

On May 15, the Ferkauf Graduate School of Psychology awarded 11 master’s degrees, 60 PsyD degrees and 21 PhDs in a ceremony in the Lamport Auditorium on the Wilf Campus. Alec L. Miller ’94F, co-founder and clinical director of Cognitive Behavioral Consultants as well as clinical professor of psychiatry and behavioral sciences at the Albert Einstein College of Medicine, delivered the keynote address.

On May 16, the Wurzweiler School of Social Work celebrated 60 graduates at a ceremony in the Lamport Auditorium on the Wilf Campus. Keynote speaker Barry Shrage, president of the Combined Jewish Philanthropies of the Greater Boston Area, spoke about the importance of advocacy in social work and in maintaining a moral compass in the face of significant turmoil and ambiguity. Invoking Abraham Lincoln, he told graduates to think of those who may seem to stand in the way of their work,“ ‘We are not enemies, but friends. We must not be enemies. Though passion may have strained, it must not break our bonds of affection. The mystic chords of memory will swell when again touched, as surely they will be, by the better angels of our nature.’ ”

“We know you are the best and the brightest, the most insightful and empathic and we know that you will be working hard to repair broken hearts, torn lives, wounded spirits and fractured psyches,” said Danielle Wozniak, the Dorothy and David Schachne Dean of Wurzweiler, in her address to the graduates. “And so we know too that our world has been waiting for this moment—waiting for you.”

On May 21, the Bernard Revel Graduate School of Jewish Studies held a celebration to honor its graduates; the school awarded 21 master’s degrees and one doctoral degree this year. Graduates were addressed by Dr. Jeffrey S. Gurock, the Libby M. Klaperman Professor of Jewish History, who presented a mini-lecture titled, “Studying American Jews and Others: A Work in Progress,” and from fellow graduate Dr. Yael Landman Wermuth, who shared highlights from her doctoral dissertation, “The Four Shomrim in Bible, Mishnah and the Ancient Near East.” Graduates also heard from Dean David Berger and YU President-Elect Rabbi Dr. Ari Berman, himself a Revel alumnus. 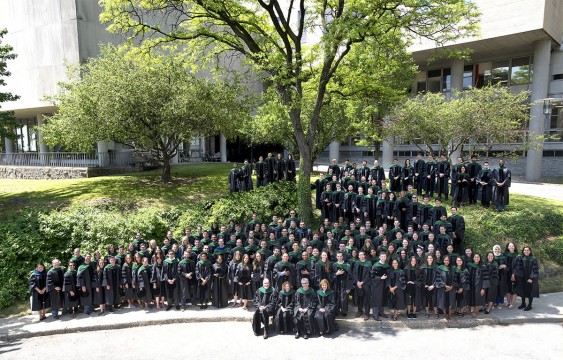 On May 23, Einstein celebrated its 59th commencement at David Geffen Hall at Lincoln Center, conferring 178 M.D. and 24 Ph.D. degrees on the graduates. In addition, eight graduates of Einstein’s Medical Scientist Training Program received both an M.D. and a Ph.D. degree. This year’s commencement speaker was Dr. Tom Frieden, former director of the Centers for Disease Control and Prevention and former commissioner of the New York City Department of Health. 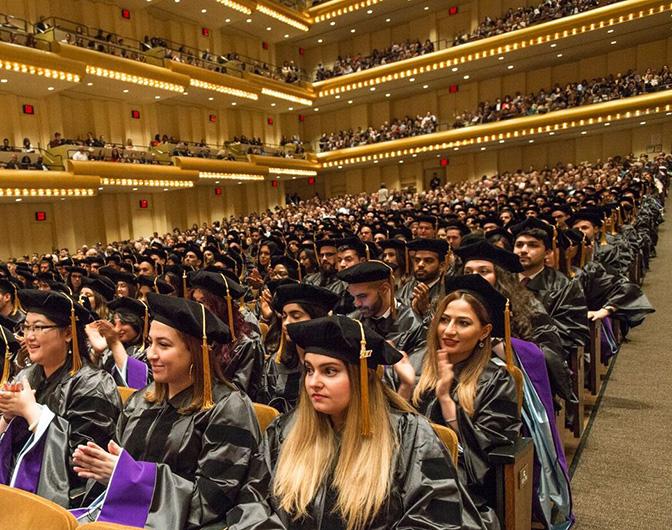 On May 24, the Benjamin N. Cardozo School of Law hosted its 39th commencement at David Geffen Hall at the Lincoln Center, awarding 70 LLM and 294 JD degrees. “We are extraordinarily proud of your accomplishments—our country is more polarized than ever and it is a critically important time to be a lawyer,” Dean Melanie Leslie told graduates.

In her keynote address, Vanita Gupta, who served as deputy assistant attorney general for civil rights under former president Barack Obama, said, “History is not linear—our values and our democracy do not protect themselves. You are obligated to see that this country lives up to its ideals.”

Cardozo conferred an honorary degree on Robert M. Morgenthau, LLB, a legal industry pioneer, former district attorney for New York County and longtime advocate for justice. Dean Judy Mender and Professor Malvina Halberstam, who will retire in the coming months, were recognized with the Dean’s Award for Distinguished Service. Professor Leslie Newman was the recipient of the Monrad Paulsen Award.

Also on May 24, the Graduate Program in Advanced Talmudic Studies at Stern College for Women celebrated seven new graduates in a ceremony at the Lea and Leon Eisenberg Beit Mirdrash on the Israel Henry Beren Campus. The group was addressed by fellow graduate Sarah Robinson as well as President Richard M. Joel.

On May 25, hundreds of new graduates from Yeshiva College, Stern College for Women and the Sy Syms School of Business received their degrees at YU’s 86th Commencement Exercises at Madison Square Garden. Ron Dermer, Israeli ambassador to the United States, delivered the keynote address and received an honorary degree. Tzili Charney, wife of the late Leon H. Charney, was awarded an honorary degree in recognition of her generosity to the University, and President Joel also bestowed the Presidential Medallion upon Rabbi Manfred Fulda, associate professor of Talmud and an educator at YU since 1959, for his service.