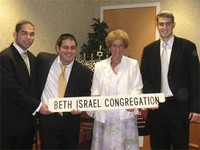 Oct 21, 2005 — Members of the 100-year-old Beth Israel Congregation of New Orleans, the city’s only Orthodox synagogue, had a Torah for Yom Kippur this year, thanks in part to Yeshiva University’s Center for the Jewish Future (CJF).

After the synagogue was flooded and its seven Torah scrolls destroyed in the aftermath of Hurricane Katrina, CJF and the Department of Synagogue Services of the Orthodox Union sent YC and RIETS alumnus Rabbi Robert Shur and undergraduates Elyasaf Schwartz and Menachem Butler to New Orleans to deliver a Torah and assist the congregation after it reached out to both organizations for help with conducting Yom Kippur services. Held in a local hotel, it was the synagogue’s first such gathering since disaster struck at the end of August.

“Yom Kippur services would not have been possible but for all your hard work and generosity, for which we will never be able to properly thank you,” wrote Eddie Gothard, a past synagogue president, in thanks to YU.

Some 10 feet of water had submerged the synagogue for three weeks. Now dry, the building remains unusable.

“Not even the images of ZAKA (the Israeli disaster-response organization) officials wading through the water-filled sanctuary retrieving the Torah scrolls could prepare us for the devastation that we saw on Erev Yom Kippur. It was not to be believed,” said Mr. Butler, a YC senior, after synagogue members took the group to see the devastation.

“This experience is yet another example of how CJF is responding to community needs of all kinds through YU’s greatest resources—its students and alumni,” said Rabbi Ari Rockoff, director of community initiatives at CJF. “We hope that these students’ efforts will have been a first step in the rebuilding process of the New Orleans Jewish community.”