Yeshiva University Hosts the National Finals and a Day of Learning

On Sunday, May 5, 2019, Yeshiva University was proud to host the 2019 National Finals for the Chidon Ha’Tanach [Bible Contest]. Over 240 middle and high school students from over 80 schools across the country competed for their chance to be named National Chidon champion and have the opportunity to compete in the International Chidon Ha’Tanach, to be held in Israel next year.

Taking place in YU’s Lamport Auditorium, the students took two sets of exams in the morning. Around mid-day, the students joined together for entertaining Bible-oriented programming, lunch and the opportunity to meet other participants.

Following that was the final round of the competition and the announcement of the 2019 winners. The Israel-bound top scorers who will represent America next year in the International Chidon Ha’Tanach will be Yehuda Zinberg (Yavneh Academy, Paramus, New Jersey), Ilan Eisenberg (Kehilla High School, California), Ezriel Vinar (Torah Academy of Bergen County, New Jersey) and Nossi Shelds (Yeshiva of Greater Washington).

Dr. Ari Berman, President of Yeshiva University, spoke to the participants and their families, connecting the Chidon curriculum of Tanach to the values that make Yeshiva University a unique institution. He also discussed how the partnership of YU and a competition that celebrates and encourages Torah learning is a natural one.

A high point of the day was YU’s hosting of a Tanach Yom Iyun [Bible educational day] for contestants’ parents and the community while the students took their tests. 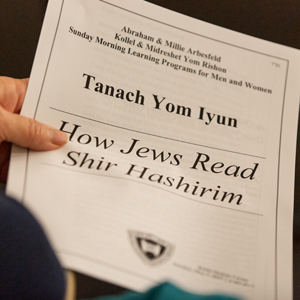 Rabbi Yaakov Glasser, David Mitzner Dean of CJF as well as a proud father of a daughter who competed in the Chidon Ha’Tanach said, “The competition motivates students to invest their free time in pursuit of Torah growth and connects them to a community of peers devoted to the study of Tanach.” He added, “It is our hope and dream that these remarkable young people continue their passion and commitment for learning at Yeshiva University.”