December and early January may be some of the coldest days of the year, but for Gavriela Colton, things will just be heating up: the Stern College for Women junior from Teaneck, New Jersey, will be headed to Chile to compete in the Pan American Maccabi Games on the USA Women’s Volleyball Team.

“I’ve loved volleyball ever since I started playing in high school,” said Colton, a middle blocker on the women’s volleyball team at Stern. “There is so much capability for growth for each player individually and for the team as a whole. In volleyball, you can improve tremendously as an individual, but you need the team even more. It doesn’t matter if a person is a great setter, if the back row can’t receive the serve, the setter will never have a chance to set the ball. Every player depends on the team.” 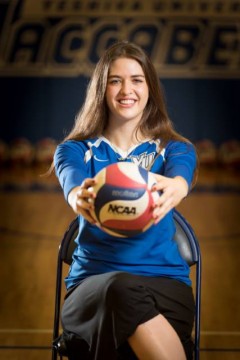 For Colton, who also plays as a forward on the women’s basketball team and was named an Athlete of the Month by YU Athletics, competing in Division III sports is also an opportunity to show the world what Jewish athletes can do. “I love going to other schools all over the New York area and having ‘Yeshiva’ written on my back,” she said. “I love walking in to a gym upstate where there might not be an active Jewish community and seeing, among the banners on the walls with names of all the schools they play, ‘Yeshiva University’ hanging up there in white and blue. I feel a tremendous amount of school pride when our team plays—like we have the opportunity to make a kiddush Hashem everywhere we go.”

After being scouted for the Maccabi team by YU coach Joseph Agrest at preseason training, Colton will have an opportunity to take both her skills and that school pride to the next level as she competes against talented athletes from countries around the globe. “I am extremely excited to have the opportunity to represent American Jewry and Yeshiva University in the games,” she said. “Going to play in these games with other athletes from all over the Jewish spectrum, I’m proud to be representing a Torah Umadda lifestyle.”

It’s no accident that Colton ended up at YU: the University is practically in her genes. She will be the fourth generation of her family to attend, going all the way back to her great-grandfather, Rabbi Joseph Karasick, who graduated from YU-affiliated Rabbi Isaac Elchanan Theological Seminary in 1945. Her grandparents, parents and cousins all attended YU as well, and her younger brother, Yehuda Colton ’17YUHSB, is a starting center on the Yeshiva University High School for Boys/Marsha Stern Talmudical Academy Lions. “I wanted to further my Jewish education first and foremost without compromising on my secular studies,” she said. “I strongly believe in a Torah Umadda lifestyle, putting my Torah values first and bringing in the secular learning to enhance and strengthen my understanding of and ability to live in the modern world.

At YU, Colton has found opportunities to pursue her twin passions: athletics and Torah studies. When one of Colton’s Bible professors, Shoshana Schechter, told her about an opportunity that pairs students at advanced levels of Jewish studies with students in the foundational Mechina Pathways Program for one-on-one learning, Colton jumped at the chance to get involved. “Making friendships with students that I may have never gotten to know through learning Torah together, developing skills, and deepening both our knowledge and commitment to Judaism sounded beyond amazing,” she said. And it dovetailed with one of Colton’s overall life goals: to serve the Jewish community as an experiential educator.

“After I get my degree in psychology at Stern, my hope is to continue my education with a graduate degree, not to become a psychologist but to pursue a career in informal education within the Jewish community,” said Colton. She has already had a chance to do that as an adviser in NCSY, where she works with teenagers who want to deepen their connection to Judaism—something Colton has found so rewarding and fulfilling that she hopes to find other avenues within the Orthodox Union to continue down that path post-graduation. “Hopefully, my background in psychology will help me make that dream a reality,” she said.